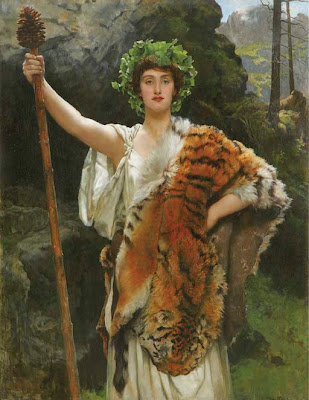 
Collier was a versatile talent whose portraits were often to be seen on the walls of the Royal Academy. He also treated genre subjects, and became known in his later career for such social psychodramas as The Prodigal Daughter (1903, Usher Gallery, Lincoln). Hugely popular, these were termed 'problem pictures' because they encouraged audiences to suggest a plot around the scene depicted, and caused animated discussion amongst gallery crowds.

Although undated, and, curiously, unexhibited at the Royal Academy, this monumental work probably dates from the artist's early career, when interest in classical subjects, as popularised by Leighton and Alma-Tadema, was at its height. Collier presents, life-size, a female devotee of Bacchus, the Roman god of wine and fertility, known in Greek mythology as Dionysus. The priestess carries all the attributes associated with the god's cult, notably a pine-cone tipped wand, known as a thyrsus, and she wears a leopard skin cloak and a wreath of ivy. In contrast to Alma-Tadema's treatment of the subject (see fig. 1), or Leighton's Bacchante of circa 1892 (see fig. 2), in which the figure is seen in movement, delighting in physical abandonment, Collier's priestess stands to attention, as if presiding over the feast to come. No doubt the picture was intended for a dining room, ball-room, or some other room of entertainment. The symbolism of the picture would not have been lost on a Victorian audience, for, since the Renaissance, the passionate, abandoned spirit of Bacchus was put forward in antithesis to the spirit of Reason as personified by Apollo, and the emblems of Bacchus were seen in the rooms in which parties were held.

The picture probably dates from the late 1880s as Collier submitted similar subjects to the Royal Academy in 1886 (Maenads, no. 757, and 1887 (An Incantation no. 716). (A maenad was the generic term given to a female follower of Bacchus). The pine-clad Alpine pass glimpsed in the background is perhaps an echo of Collier's early years, for after leaving Eton, he studied in Heidleberg and spent several summers in Switzerland. Collier's father, the Rt. Hon. Sir Robert Porrel Collier, a lawyer and M.P., later elevated to the peerage as Lord Monkswell, was a talented amateur painter of Alpine scenery who exhibited his sketches regularly at the Royal Academy between 1864 and 1885.

Collier's trained at the Slade, under the tutelage of the classicist E.J. Poynter, and continued in Munich and Paris, where he studied under J.P. Laurens. Collier's father asked Alma-Tadema whether he would take his son as a pupil, and although Alma-Tadema reluctantly refused, he took a keen interest in Collier's career. In order to show the younger artist how a painting should be constructed he executed The Sculptor's Model (1877) in Collier's studio. Collier returned the compliment by exhibiting a portrait of Mrs Alma-Tadema at the Grosvenor Gallery in 1881 (no. 11).

Alma-Tadema's notorious demands for historical accuracy have been observed in the present work, although the features of the model are those of a High Victorian beauty. Through his family connections, Collier also spent much time in Millais's studio, studying the artist at work while executing portraits. In its skilful handling of different textures and its commanding pose, the present picture is an excellent example of the restrained good taste that made Collier such a popular portraitist and ensured his commercial success.
at 6:00 AM

I'm sorry, Hermes, but, despite your interesting introduction to this picture, I can't but find it funny - I mean the really, really, sends-me-into-giggles sort of funny. If I went to a party and found this on a wall I would probably stand in front of it for ages enjoying what I would assume to be a send up . . . and offend all art lovers in the process I suppose!

Having read what you say, I've gone back up the page to look at the picture several times and it still brings an automatic smile. Are you absolutely certain it isn't self-consciously daft?

It would look so good in Tesco's - Lucy - you'd be straight through the tills! Good to have you back.