John Frederick Lewis - The Hypaethal Temple at Plilae on the Nile, Egypt 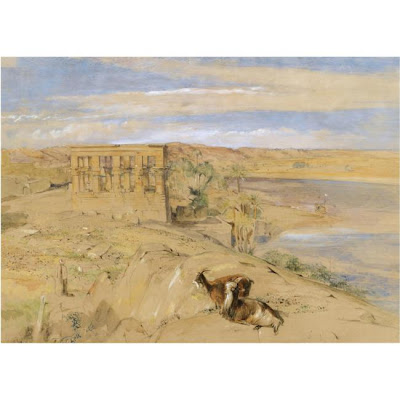 Lewis spent ten years in Egypt, arriving there in late 1841. However, it was not until 1850 that he made a trip up the Nile, visiting Edfou, Thebes and Philae. If this picture is Ruins, Egypt listed by Major-General Lewis, it was painted in 1851 along with two sketches of doorways of an ancient Egyptian temple (Birmingham Museum and Art Gallery and Victorian and Albert Museum).

This temple, also known as the Bed of Pharaoh, is the Roman period, built under the Emperor Trajan (A.D. 98-117). It was intended as a monumental entrance to the temples on the island of Philae but was never completed.
at 6:00 AM