Alexander MacKenzie - Out of Tune 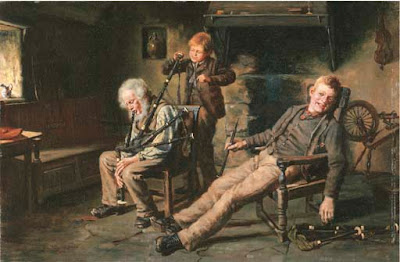 
A genre painter who lived in Aberdeen, Mackenzie exhibited six works at the Royal Glasgow Institute between 1883-1890 and sixteen at the Royal Scottish Academy from 1877-1890. Other exhibited paintings are either genre scenes such as Toothache (1877), Surprised (1882) and Frugal Meal (1890) or Highland landscapes including Falls of Cullen, Ross-shire (1886) and Kirktown, Fetteresso, Stonehaven (1879). Here we see a rustic cottage interior with presumably the grandfather of the two boys practicing the pipes, whilst one rests in his chair, the other plays a trick on the elderly man, interfering with the bag-pipes presumably to make the instrument out of tune. This type of humorous composition in which youth and age are contrasted, the adults being teased by the children, was popular with genre painters in the 19th century and follows in the tradition of Wilkie's domestic interior scenes, such as The Blind Fiddler (1806) in which the blind man plays to the left of the composition whilst a child to the far right mockingly immitates him.
at 6:00 AM