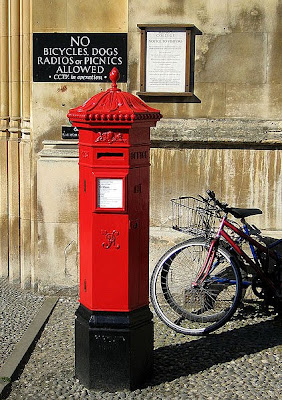 [A Penfold Hexagonal postbox. This was the standard design for UK Post Office boxes between 1866–1879.

This example is on King's Parade, Cambridge beside the main gate of King's College.

Traditionally UK post boxes are marked with the initials of the reigning monarch at the time of their installation. In this case, the post box carries the initial VR for Victoria Regina, indicating Queen Victoria]

By the late 19th century, there were between six and twelve mail deliveries per day in London, permitting correspondents to exchange multiple letters within a single day.
at 7:27 PM

I have seen many of the designs for letter boxes, changing slightly according to location and with testing over the first decades of use. They are always clever.. and attractive.

The price of our stamps have gone up yet again and this seemed timely. I've actually posted a letter in this box in Cambridge.