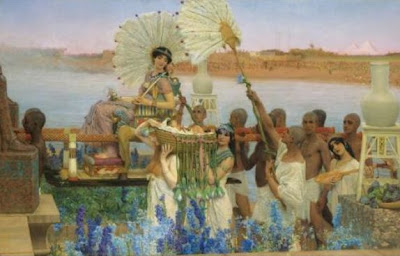 NEW YORK, NY.- Today at Sotheby’s in New York, The Finding of Moses, a 19th century masterpiece by Sir Lawrence Alma-Tadema, sold for a remarkable $35,922,500, more than seven times the presale high estimate of $5 million*. The monumental canvas was sought-after by three determined bidders who battled for nearly eight minutes. Soon after auctioneer and Vice Chairman Benjamin Doller opened the bidding on the spectacular painting, it quickly rose to more than $20 million in a battle between two clients participating by phone. Suddenly, a new bidder in the room entered the fray, raising a paddle for $23.5 million. After several more minutes the painting sold to one of the original phone bidders for an extraordinary $35.9 million, a new record for the artist at auction. The previous record for the artist had in fact been set by this exact painting when it was sold in 1995 for $2.8 million. The painting was included in a sale of 19th Century European Art which brought a total of $61,536,125.

The Finding of Moses stands as one of Sir Lawrence Alma-Tadema’s greatest masterpieces. In November 1902, the artist left London to travel to Egypt for the opening of the Aswan Dam as a guest of Sir John Aird, the renowned engineer and head of the project. In his personal life, Aird was known as a great patron of the arts, and he likely brought Alma-Tadema on this trip to commission another painting from the artist for his collection. Alma-Tadema in turn found himself as inspired by Egypt as he had been 50 years earlier in his travels to Pompeii. He provided Aird with three subject options, from which he quickly chose The Finding of Moses.

The painting once belonged to Allen Funt, creator of the popular prank show Candid Camera. His collection of masterworks by Alma-Tadema was exhibited in a landmark show at the Metropolitan Museum of Art in 1973. If the setting of The Finding of Moses looks familiar, it is because prints of the painting were later used by Cecil B. DeMille’s script writers and designers as inspiration for scenes from Cleopatra (1934) and The Ten Commandments (1956).

The masterpiece by Alma-Tadema was included in a sale of 19th Century European Art which featured a number of other remarkable prices. A new auction record was established for Giovanni Boldini when his stunning Portrait of Giovinetta Errazuriz sold for $6,578,500, more than four times the high estimate of $1.5 million. The sale also included two works from the collection of the actress Demi Moore -- William Bouguereau’s Frère et Soeur which sold for $1,082,500 and Alfred Stevens’s Mère et ses Enfants, which brought $182,500.

*Estimates do not include buyer’s premium