Painting by David Wilkie, A Favorite of King George IV, Acquired by the Huntington Library 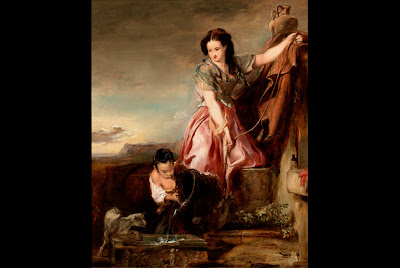 [Wilkie painted Sancho Panza in the Days of his Youth in 1835, after a pivotal trip to Spain]

SAN MARINO, CA.- The Huntington Library, Art Collections, and Botanical Gardens announced today the acquisition of Sancho Panza in the Days of his Youth (1835), by British painter David Wilkie (1785–1841). The painting, which previously was held in the collection of Christopher Forbes, was purchased in September and has just gone on display in the Huntington Art Gallery among works by other British artists of the 19th century.

One of the greatest practitioners of genre painting in Britain, and, along with J. M. W. Turner and John Constable, one of the most influential British artists of the 19th century, the Scottish-born Wilkie made his career in London, where his list of patrons included the top members of British society, such as the Duke of Wellington, and John Julius Angerstein, whose collection founded the National Gallery, London. A favorite of King George IV, Wilkie painted a large number of works that remain in Britain’s Royal Collection today. While The Huntington owns notable paintings by Turner and Constable, until now it has lacked a major picture by Wilkie.

“Opportunities to buy anything by Wilkie, let alone a major finished picture, are extremely rare,” said John Murdoch, Hannah and Russel Kully Director of the Art Collections at The Huntington. “Sancho Panza in the Days of his Youth is, furthermore, a gorgeous painting well known both from its former presence in one of the great private collections of British art, and from scholarly literature. For us it satisfies a long-felt need, and we are absolutely delighted.”

Wilkie was an innovator in the field of genre painting. Not content merely to chronicle the actions of everyday life, he injected his scenes with new psychological depth by depicting the physiological expression of the range of human emotion. When he brought this practice to his more historical pictures, it caused a sensation at the Royal Academy, where crowds of people gathered to see his work. Wilkie’s revolutionary approach to narrative painting had far-reaching influence for European art. The pursuit of a visual art that expresses humankind’s inner psychic experience became one of the main preoccupations of artists throughout the 19th and into the 20th century, from the Romantics in Britain to Auguste Rodin and Edgar Degas in France.

Sancho Panza in the Days of his Youth is one of Wilkie’s literary subjects—a scene inspired by the novel Don Quixote by Miguel de Cervantes. It reveals the lush, painterly style he developed on an extended visit to Spain from 1827 to 1828 and was shown at the Royal Academy exhibition of 1835 along with several other Spanish subjects. Wilkie’s Spanish pictures marked a major change in the artist’s style. His early career had been founded on genre paintings in the mode of the Dutch Old Masters—dark, minutely painted tributes to the work of Adrian Ostade and David Teniers. His trip to Spain brought Wilkie into contact with the work of Spanish artists such as Diego Velázquez and Bartolomé Esteban Murillo, as well as Italian paintings by Titian and Correggio in the collections of the Prado and the Escorial. More broadly painted and richer in color, the pictures he exhibited after his return to London are marked by a depth of glazing, long flowing contours, and sweeping brushwork. The strong diagonal composition and brilliant coloring of Sancho Panza are particularly dramatic.

The painting has been installed on the second floor west wing of the Huntington Art Gallery, in Room 28 as indicated in the gallery guide.