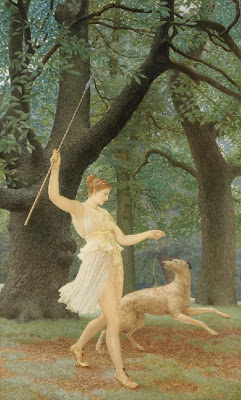 Henry Holiday's picture shows Artemis, the Olympian goddess who was a virgin and a huntress, and who presided over the transition from girlhood to womanhood. Known as a vengeful and merciless deity in her dealings with men who abused or took advantage of women, even unwittingly, she destroyed Actaeon who glimpsed her when bathing with her nymphs, and killed Tityus for his attempted rape of Leto. Artemis is here seen wandering through a forest. At her side is a deerhound, and in her hand a spear.

Holiday's artistic training took place at Leigh's School in London, and later at the Royal Academy Schools. In 1857 he competed for the Turner gold medal for landscape painting, the set subject for which that year was simply 'An English Landscape'; Holiday submitted a view that he had done at Durlestone Bay, Dorset. He was unsuccessful, coming to suspect that the Royal Academy judges were prejudiced against all works done directly from the motif. All through his career, Holiday sketched and painted landscape, on occasions and as seen here, using such subjects as
backgrounds to figure subjects. Holiday explained how the different elements of Artemis were put together: the painting was, he wrote in his Reminiscences of my Life, 'strictly a Hampstead picture. The face was painted from our friend and neighbour, Mrs Gilbert Scott, whose son [Giles Gilbert Scott] (not then born) is now building Liverpool Cathedral. The staghound was our own dog, and the wood was painted in the glade, just outside our garden.'

Although best known for his decorative designs for Powells' stained glass, Holiday was one of the most versatile of Victorian artists, producing book illustrations, enamels, murals, sculpture and watercolours over a career of almost seventy years. Often choosing classical subjects for his intricately painted watercolours, this picture is comparable with such works as The Garden of the Muses, of 1862 (location unknown), and Music of 1876 (private collection). The Hellenic goddess Artemis, or her Roman equivalent Diana, was represented by a number of artists in the period, including E. J. Poynter, G. F. Watts, Briton Riviere and Walter Crane.

The present watercolour was shown at the Royal Academy in 1877, as Diana. With another work by Holiday, it was commended by the Art Journal's exhibition reviewer: 'The "Three children of the Rev. Clement Prance" (666), for example, and the richly toned academic picture of "Diana" (835), attired for the chase, and accompanied by her hounds, as she marches through the greenwood, entitle their author, H. Holiday, to a conspicuous place in the honours list.'

This picture was owned by Reverend Kitchin, who appears to have been a friend of the Holiday family. Holiday painted his own daughter Winifred accompanied by Kitchin's daughter Alexandra in a watercolour entitled The Duet (sold in these rooms, 25 November 2004, lot 38). Both The Duet and Artemis had been in the posession of Mr Reginald Prance a watercolour collector, where they remained until 1894. Reginald Prance was presumably a relative of Rev. Clement Prance whose children were painted by Holiday in the same year that he exhibited Artemis.