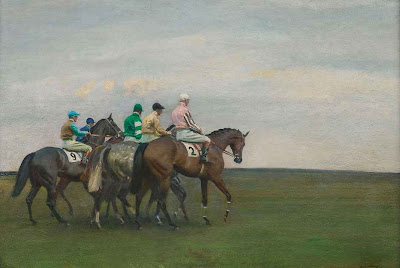 LONDON.- Bonhams sale of 20th Century British Art once more exceeded expectations yesterday when it made a £2 million total and a brand new world record price for a Helen Bradley picture sold at auction, for £144,000.

Bradley (1900-1979), who started painting in her sixties, and died shortly before she was due to be honoured with an MBE, had previously commanded £97,000 as a best price at auction, said a delighted Matthew Bradbury, Head of 20th Century British Art at Bonhams. The world record picture titled "Blackpool Beach" a sunny image of bathers, had been estimated to sell for £70,000 to £90,000. Matthew Bradbury said that the sale had “produced strength across the board” with the 90 lots offered generally doing well.

Excellent - I love Munning's The Start Newmarket. Sometimes his horse scenes were too crowded out with fussy landscaping, but this time the landscape was very very stark.

But what is ALWAYS unknowable is the price that is fetched. What made the price of £524,000 reasonable and not, say £224,000? There may have been a world financial crash last year, but some ends of the market have held up very well.

Thanks. I've always said to people that quality art will hold its value as it is a one off. I'm not a great fan of Munnings but I can see why this would sell well.