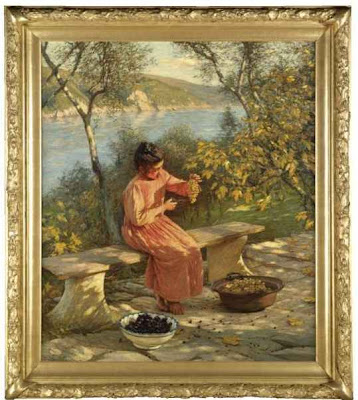 In 1904, having painted in the hill villages of Provence for two years, Henry Herbert La Thangue ventured into neighbouring Liguria. For him, the beautiful coastline of northern Italy between Genoa and La Spézia, had all the assets of the French Riviera, but none of its tourists and motorcars. At a time when British and American visitors flocked to Florence, Rome, Naples and Venice in Thomas Cook's democratised version of the Grand Tour, this beautiful corner of Italy remained untouched. Praised in the Laudi of D'Annunzio, Liguria attracted poets, romantics and those like La Thangue, of a solitary disposition. Its tiny fishing villages - those of Cinqueterre - clinging to steep hillsides that sloped into the sea, tested the traveller. Roads in Liguria were unmade at this time, and walking, or riding in a donkey cart along tracks known as sentieri, one passed through ancient vineyards and crumbling settlements bleached by the Mediterranean sun. As Goethe discovered at the end of the eighteenth century, vines in northern Italy were grown on trellises, and when he arrived in a town, he found women fruit-sellers using 'round flat-bottomed baskets' to display their produce (Letters from Italy, Penguin Classics, 1995 ed., p. 3). Life on the land had changed very little in the intervening century, even though the Austro-Hungarian Empire had contracted and a unified Italy had emerged.

In his first Italian canvases, such as From a Ligurian Spring (FIG 1. sold Sotheby's 14 December 2006, lot 176) and Winter in Liguria (FIG. 2, private collection), La Thangue simply found motifs similar to those he had painted before - a farm girl drinking by a water-course. However, on subsequent expeditions this changed. The rural economy depended exclusively upon viticulture and fruit-growing; preparing, packing and sometimes selling produce, took place at the roadside. Ligurian Grapes forms part of a sequence on this theme which began in 1905 with a picture of an orange seller (private collection). The series continued with Ligurian Flowers, 1908 (Blackburn Art Gallery) and led eventually to his Royal Academy Diploma picture, Violets for Perfume, 1914 (Royal Academy of Arts, London).

We learn from a letter written to the keeper of Blackburn Art Gallery that La Thangue returned regularly to these coastal villages and that his model was 'exceptionally nice and posed well'. He greatly enjoyed the dilapidated old houses and their gardens, pergolas and trellises later became subjects in themselves.

During the Edwardian years La Thangue occasionally returned to scenes of rural life near his home in Graffham, Sussex. However these became progressively less appealing than works such as Ligurian Grapes, which explored the rich colours and textures of warmer climes. Matched with pictures of the frontier forts and mountain passes, these coastal views formed the core of his solo exhibition which was lavishly praised by Walter Sickert at the Leicester Galleries in 1914 (see Kenneth McConkey, A Painter's Harvest, HH La Thangue, 1859-1929, Oldham Art Gallery, 1978, pp. 13-14). Nevertheless, although La Thangue responded to the atmospheric landscapes of Liguria, he was essentially a figure painter for whom the chance encounter on a country road provided the essential stimulus. Rudolf Dircks, writing in the Art Journal on the present picture, praised him as a 'lyricist of the sun', who was, 'particularly happy in his Ligurian Grapes',

...a simply composed picture of a girl seated on a bench pruning a bunch of grapes, in which sunlight and shadow, brilliant as ever, seem to serve more the expression of a simple artistic purpose than an idiosyncrasy.

In his youth, as leader of what was pejoratively dubbed the 'Square Brush School', La Thangue had often been described as dogmatic if not idiosyncratic. By the time he discovered Liguria, his early proselytising had gone and a 'simple artistic purpose' had emerged. This involved a Ligurian girl, sitting on a stone bench, with her back to the hills and the sea, baskets or bowls at her feet. Unity is achieved through the careful observation of the fall of sunlight, and in this romantic setting, the activity - trimming a bunch of grapes - takes on Virgilian significance, while at the same moment revitalising the visual heritage of earlier Victorian painters like Henry Woods who ventured to Chioggia and Capri in order to paint sentimental pictures of vine pergolas and pretty peasants. Critics of his day were certain that if La Thangue had sacrificed the wistful grey tones of his earlier work, his hot palette of 1907 contained no clawing sentiment. Nevertheless, as the seeds of popular tourism were scattered over wider terrains in the 1920s, and with expert tunnelling, the railway reached La Spézia, even he recognized that 'his Liguria' had been no more than an interlude. Writing in 1929 a few months before his death, La Thangue felt compelled to note, 'all of these regions have been spoilt by the war and still more perhaps by peace'.

We are very grateful to Professor Kenneth McConkey for preparing this catalogue entry. 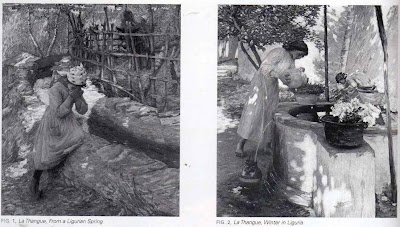