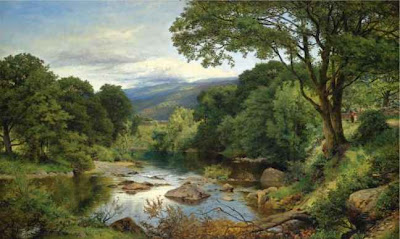 The present picture may have been conceived as a pendant to a picture of the same dimensions exhibited at the Royal Academy in 1860, A Quiet Valley Among the Welsh Hills (Worcester City Museum and Art Gallery). A Quiet Valley Among the Welsh Hills and the present work are comparable in style, if not subject, with another landscape painter John Brett's famous Val d'Aosta. The picture would have been painted only four years after A Quiet Pool in Glen Falloch (sold in these rooms, 14 December 2006, lot 136). The picture is a rare work by Leader, painted during an early period in his life when his landscape painting was enriched by the same qualities which are to be found in contemporary Pre-Raphaelite art. The paintings produced in the late 1850s and early 1860s are certainly the most interesting of all Leader's landscapes and have a sense of light and colour which was lost in his later work. His paintings have the same qualities which can be found in almost contemporary work by William Inchbold and to a lesser extent John Everett Millais' Scottish landscapes The Waterfall and his famous portrait of John Ruskin both of 1853.

It was around 1857 that Benjamin Williams made the decision to change his name, having become frustrated by the confusion caused by the similarity of his name to that of many artists exhibiting in the various exhibitions in London. He adopted his father's second name of Leader and became known as Benjamin Leader. It was perhaps feelings of guilt at having dropped his family name that led Leader to rethink his name in 1858, finally choosing the name Benjamin Williams Leader. 'The twenty-five years from 1857 were very important for our artist. During this period he made every effort to establish himself as a professional landscape artist. This included obtaining official recognition on the walls of the most important public forum and testing ground for nineteenth century British artists - The Royal Academy. Changing his name was the first decisive step in his bid for fame.' (Ruth Wood, Benjamin Williams Leader RA 1831-1923, His Life and Paintings, 1998, p. 22)
at 6:00 AM