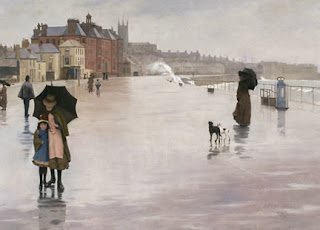 [The Rain it Raineth Every Day - Norman Garstin]
http://www.cornwalls.co.uk/Newlyn/school_of_art.htm 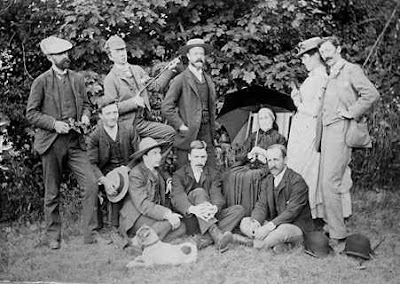 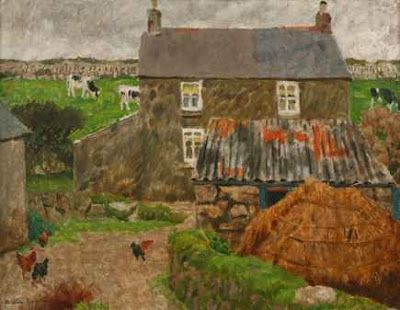 [Alethea Garstin - Little Farm Place, c.1952 - Oil on board]
Alethea was the daughter of the Newlyn School artist Norman Garstin, but went on to forge her own career and reputation as a central figure amongst the later group of artists. The St Ives modernist painter Patrick Heron called her 'England's leading Impressionist painter'. 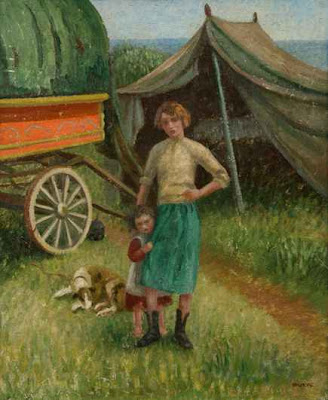 [Marjorie Bruford - The Gypsy Camp - Oil on canvas]
Midge Bruford was born in Eastbourne, but was educated at Badminton House girls’ school in Bristol where she became friendly with Mornie Birch, daughter of the artist S.J.‘Lamorna’ Birch. It was probably this friendship which first brought her to Cornwall.

She started her artistic training at Stanhope and Elizabeth Forbes’ School of Painting, supplemented by informal tuition from Birch. She later studied at Harold Harvey and Ernest Procter’s painting school, and exhibited alongside Harvey on several occasions.

Apart from a period of study in Paris, Midge Bruford remained in west Cornwall, finally settling in Paul village, not far from Newlyn. She exhibited at the Royal Academy thirty-two times between 1924 and 1955, and also showed work at the Walker Art Gallery, Liverpool; New English Art Club, and Goupil Gallery, London, as well as at Newlyn Art Gallery.

As well as being an artist, she also modelled for other painters, including Dod Procter who painted her several times.

It was a very good post indeed. I thoroughly enjoyed reading it in my lunch time. Will surely come and visit this blog more often. Thanks for sharing.Green Walls

They must be feeling really great having won this award. As a home owner I always believe in hiring the best service providers for getting a job done. If you need a foundation repair company you should go toBuy electronics online in Dubai

I simply want to tell you that I am new to weblog and definitely liked this blog site. Very likely I’m going to bookmark your blog . You absolutely have wonderful stories. Cheers for sharing with us your blog.vintage clothing London

hank you. My 6 year old son has ADHD and he hate to sit down and learn his spelling. He has been failing his spelling test all year. I'm going to try some of your ideas as soon as he gets home from school today. Thank you, you are a life saver.commercial popcorn machines

great ideas, I particularly love the active ideas like the ball bouncing, so good for those who cant sit still!commercial popcorn machines

Great ideas. I am hearing these tips for the first time. It will be more useful to the moms who help their students in studying. Keep sharing these types of useful tips.auto locksmith edinburgh

Generic dating sites not cutting it? These are the best dating sites for singles looking for an interracial relationship.contractorwebsites.com