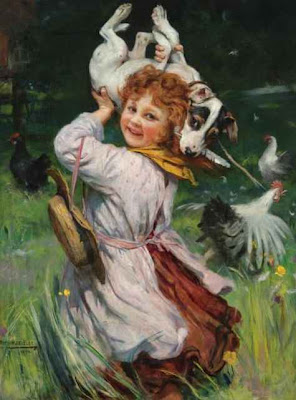 Arthur John Elsley was born in London on 20th November 1860. After training at the Royal Academy Schools he made a living painting commissioned portraits of human, equestrian, and canine subjects. In 1889 he joined the studio of established artist, and leading exponent of juvenile scenes, Fred Morgan (1847-1927). Morgan believed in the old adage every picture tells a story. Elsley now turned his portraiture skills to successful story telling. He began by painting children with a pet, or pets and other animals. Here he is displaying his talent for capturing movement, and the joy in the humorous moment, carefully observing the comic retreat of the chickens.

Fox Terriers, collies, and St. Bernards were Elsley's favourite canine models in the last decade of the 19th century. Terriers and their pups appear in numerous of his paintings including Wait A Minute 1893, Good-bye 1894, Breaking Them In 1895, and Safe Quarters circa 1895.

The same girl and smooth-haired fox terrier appear in another humorous scene painted around the same time. It was reproduced as a colour print entitled Second Thoughts. The girl is holding her pet up to a cat on a wall, who is hissing - jealously guarding a lobster claw meal.

Elsley exhibited one work at the Royal Academy in 1894 and two in 1895, but not this one. It may have been a commission as there is no exhibition record of this painting.

We are very grateful to Terry Parker for preparing this catalogue entry.
at 6:00 AM

Regular practise and careful playing is required to be able to convey and evolve the different themes, rewarding you with that intimate instrument connection that we musicians lust for.website hosting

I discovered so numerous interesting stuff in your weblog especially its discussion. From the tons of comments.goedkoop vliegen

Exactly the reason why perhaps not really take a few of the burden from yourself through enabling your loved ones members that will help you in your own daily work. Here are a few ideas that you could put in to action to begin obtaining your own household included.bankrupt bank account

I want to express my admiration of your writing skill and ability to make readers read from the beginning to the end. I would like to read newer posts and to share my thoughts with you.dedicated server

Using a stocks tip list like this is a smart move to make if you are inexperienced or don’t have the time to put towards analytics yourself like hardly any of us do.Bike Accident Lawyer Key West

Your web site most of these a contents AND nice information about your internet site now i am Visit primary time but The idea too good.typography inspiration

These are so adorable! My husband's birthday is coming up in a few weeks and I need some unique gift ideas for him. I don't have a ton of money to spend but I want to get him something that will last.samsung j5 prime singapore

You may contact my previous clients who will tell you about work quality and make you choose my services.2 star Tuscan hotel on the sea

Nice news! I have never heard about this event before fun things to do in peoria il