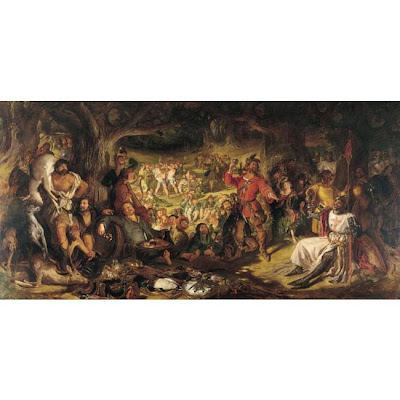 signed and dated l.r.: D.MACLISE 1839/ retouched 1845; bears an inscription on an old label attached to the backing: Maclise's Robin Hood
oil on canvas

Maclise's large and magnificent painting Robin Hood comes from the early years of his career in London. He had arrived in the city from his native Ireland in 1827, enrolling at the Royal Academy Schools, where he was regarded as a brilliant student. In the 1830s he exhibited portraits and historical subjects at the Royal Academy, and in 1836 he became an associate member of that body. Robin Hood was shown at the Academy in 1839 and was a resounding critical success. The Art Union enthused: `How delicious is this picture of All-a-Dale; How glorious this of Friar Tuck ... How famous this of the jovial captain of the merry-men all; how admirable are the minor details; how finely has all been imagined; how skillfully all has been executed.' The review continued to enthuse about the work, declaring it: 'An outbreak of genius and unquestionably the leading attraction of the exhibition'. It was the conviviality of the scene which gave most delight, as Fraser's Magazine indicated when observing that `in the large picture everybody grins and shows his whole ratelier; and you look at them, and say ``These people seem all very jolly.''' As a consequence of the warm reception given to the painting, Maclise was elected as a full member of the Academy, his professional prospects clearly in the ascendancy. Shortly afterwards he was a prize winner at the competition for the decoration of the Palace of Westminster, and was commissioned to paint subjects entitled The Spirit of Chivalry and The Spirit of Justice for the House of Lords. From the late 1830s onwards Maclise was regarded as one of the most eminent painters of his generation.

The subject of the painting was given at length in a ballad published in Fraser's Magazine at the time that it was first exhibited at the Royal Academy. Set in a forest glade, King Richard I, just returned from imprisonment in Austria following the Third Crusade, encountered the outlaw Robin Hood and was challenged by him. In the combat between the two the king was victorious. So impressed was Robin Hood by his opponent's skill and strength that he invited the unknown adversary to feast. When all were gathered together Robin Hood raised a goblet to drink the health of the king, still unaware of his presence in their midst. At this point, heartened by this demonstration of the loyalty of Hood and his men, King Richard announced himself.

The king is seated in the foreground, wearing chain mail and the red cross of a crusader, while Robin Hood stands at the centre of the composition. As was described in the catalogue of the 1839 Royal Academy exhibition, Robin `is represented according to old ballads, - ``Yclad in Scarlette Redde, His men in Lyncolne Grene.'' He raises a silver goblet to drink a ```Health unto the Kynge,'' whom as yet he does not know - ``The Kynge himself drank to the Kynge, and round about it went.''' The popular legend of the outlaw Robin Hood tells of his struggles against the corrupt figure of John, younger son of Henry II and usurper of the crown of England during the years that his older brother Richard was away. These owed much to the eighteenth-century literary antiquarian Joseph Ritson, who had gathered together many of the early stories as Robin Hood: a collection of all the ancient poems, songs and ballads now extant relative to that outlaw (1795), and which was illustrated by Thomas Bewick. Percy's Reliques, of 1765, had previously included the story of Robin Hood and Guy of Gisborne.

However, as Joanna Banham has made clear in her essay `Images of the Middle Ages in the early nineteenth century' (in the exhibition catalogue William Morris and the Middle Ages, Whitworth Art Gallery, Manchester, 1984, pp.17-31), the immediate inspiration for both the published ballad and Macl
at 6:00 AM