Sophie Anderson - It's Touch and Go, To Laugh or Not 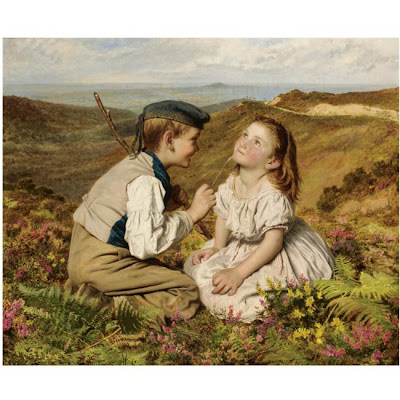 signed and dated l.r.: S. Anderson 57; inscribed and signed on an old label attached to the reverse: It's Touch and Go/ To Laugh or No/ Mrs Anderson/ Bramley/ Nr Guildford

'You may be interested in another picture of children by Sophie Anderson [...] I myself like it just as much as 'No Walk Today'. The game they are playing is to try not to laugh when being tickled with a bit of grass and I don't think the little girl is going to succeed!' Sir David Scott

Subjects of children playing nursery games were popular in the 1850s. The present painting of a boy and a girl playing a simple game whereby he tickles her lips with a stem of grass and she attempts to resist laughing or crying out establishes Sophie Anderson's position as one of the foremost Victorian painters of children and themes of childhood. This was a nursery game, in this period usually called 'You must not laugh, you must not cry, till I count to ten'.

Like the little girl in No Walk To-day, it seems probable that the models for It's Touch and Go, To Laugh or No were the children of Walter and Sophie Anderson. The boy wears a Tam O' Shanter cap, suggesting that it was intended that the subject should be seen as having a Scottish setting. The heather and bracken upon which the two figures are kneeling likewise suggests the north (although Lindsay Errington wrote in the catalogue entry for the exhibition Sunshine and Shadow, that she believed the landscape represented was the Surrey heathland).

Anderson painted well behaved, clean and rosy-cheeked children, the very opposite type of child that had been described by Charles Dickens in Bleak House of 1853; children who swore and bit, stole and ran barefoot through the streets. Her paintings celebrate the joy of youth and do not overly sentimentalise the subjects, presenting the games played by children as the artist might have observed them played in her own home. Similar subjects by Anderson depicting children's games, include I Trump Hearts, It's My Turn to Play Mother, Guess Again and The Cheat.

In the Victorian period there was a proliferation of images of children, the popularity of which Susan Casteras has explained in her book on the subject, Victorian Childhood; 'The popularity of sentimental genre pictures in Victorian England is well established, and narrative paintings with nineteenth-century subject matter were produced by some of the most important artists of the period. Filled with incident and detail, such paintings depended upon a mixture of stylistic exactitude and calculated emotion to achieve their success with viewers[...] Society sanctioned the Victorian veneration and rediscovery of childhood in art and allowed adults to experience again or re-awaken memories of their own children's youth in ways that were not fully understood in pre-Freudian times. And while there is undoubtedly an element of escapism and wishful thinking in such narrative pictures, there is also a lot to be learned. Perhaps it is a nearly universal adult need in Western cultures to preserve and promote the myth of childhood in predominantly rosy terms, in order to satisfy the need for emotional continuity between art and life and to enable people to cope with the joys and sorrows of the past and the present.' (Susan P. Casteras)