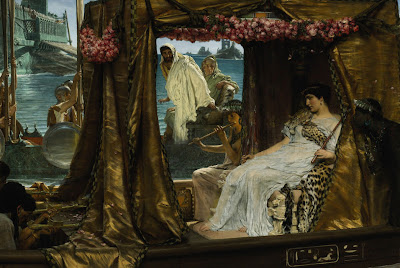 [Sir Lawrence Alma-Tadema's The Meeting of Antony and Cleopatra: 41 BC sold for $29,202,500–nearly six times the pre-sale high estimate of $5 million. Photo: Sotheby's]


NEW YORK, NY.- A masterpiece by Victorian artist Sir Lawrence Alma-Tadema set another incredible price at Sotheby’s New York today in the sale of 19th Century European Art. Two determined phone bidders held a steady competition for The Meeting of Antony and Cleopatra: 41 BC for over eight minutes, driving the final price to a remarkable $29,202,500–nearly six times the pre-sale high estimate of $5 million. This marks the highest auction price of the week in New York , and follows the $35.9 million record for the artist established at Sotheby’s last November by The Finding of Moses.

Alma-Tadema's The Meeting of Antony and Cleopatra: 41 BC, depicts one of the most iconic moments in Roman-Egyptian history, and the artist turned to Shakespeare –not translated ancient texts -- for inspiration. Between 1850 and 1912, the Bard's Antony and Cleopatra was regularly staged at London's theatres, and the Egyptian queen was fully entrenched in the public's mind --particularly for her intoxicating beauty and the power and tragic romance it attracted (Barrow, p. 116). In the present work, AlmaTadema favors a quiet, nuanced moment in Shakespeare's drama: a strong memory recalled after the legendary lovers have been separated (Act II, scene ii, Swanson, Catalogue Raisonné, p. 219). Upon Caesar's assassination, Antony became one of the triumvirs ruling the Roman Empire, and summoned Cleopatra (who had been Caesar's lover) to Tarsus in Cilicia to prove her loyalty. Upon the queen's arrival, Antony was seduced, and returned with her to Alexandria for a life of scandalous pleasure. By the play's second act, the Empire's civil unrest can no longer be ignored, and Antony returns home, where he marries Octavia, Caesar's widowed sister, leaving behind an infuriated Cleopatra. However, as Roman officer Enobarbus recounts, and AlmaTadema depicts, the lasting influence of his first meeting with the queen will ultimately prove her the victor of Antony's heart:

The barge she sat in, like a burnish'd throne,
Burnt on the water. The poop was beaten gold,
Purple the sails, and so perfumed that
The winds were love-sick with them; the oars were
silver,
Which to the tune of flutes kept stroke, and made
the water which they beat to follow faster,
As amorous of their strokes. For her own person,
It beggar'd all description: she did lie
in her pavilion –cloth of gold, of tissue –
O'er-picturing that Venus when we see
The fancy outwork nature...
at 12:41 PM

grossly overpriced for sure. Funny thing is I saw the one that went for 36 million in person. The frame wasn't even in perfect shape, there were several marks on it. That's an insane amount of wealth to have.

Thank you. It's not real money at that price but some sort of investment.