Joseph Farquharson - When the West with Evening Glows 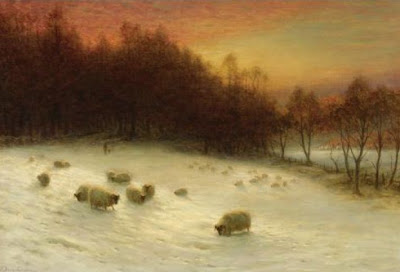 
When the West with Evening Glows is a version of a painting of the same title exhibited at the Royal Academy in 1910 (Bristol City Art Gallery). Two different compositions with the same title are also known, one depicting a snow
covered country road and a trio of crows was painted in 1901 (Manchester City Art Gallery) and another of a young girl in a winter woodland (Sotheby's, Gleneagles, 30 August 2006, lot 1014). It was not unusual for Farquharson to paint second versions of successful paintings for patrons who had admired pictures that had already been sold.
at 6:00 AM