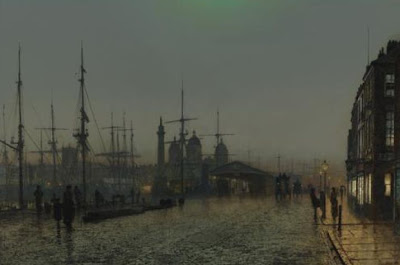 
The work of Atkinson Grimshaw is valuable and unique in several respects. He made a great popular success out of that amalgam of Pre-Raphaelite sentiment, nature and industry that dominated the culture of northern England in the later nineteenth century. His work is our only visual equivalent to the great epics of industrial change, the novels of Gaskell and Dickens.' (David Bromfield, Atkinson Grimshaw 1836-1893, exhibition catalogue, 1979-1980, p. 5)

John Atkinson Grimshaw celebrated the age of industry, commerce and conspicuous wealth in a series of paintings in which moonlight and lamplight contrast with one another and skeletal trees or ship's rigging are interchangeable. In the present picture of the docks at Hull with the sailed-barges and steamers, horse-drawn hansoms make their way along the wet cobbled road which reflects the gaslight of the shop windows that face the dock. A young woman and her child are hurrying across the road whilst on the opposite pavement another woman stops to talk to an organ-grinder silhouetted against the glow of a street-lamp. Bromfield has interpreted Grimshaw's port scenes as 'icons of commerce and the city. They are remarkable in that they record the contemporary port's role within Victorian life; they appealed directly to Victorian pride and energy.

They also show that same darkness, a mysterious lack of complete experience of the subject which one associates with large cities and big business, which Dickens recounts so well in Bleak House and Great Expectations and for which Grimshaw's moonlight became a perfect metaphor.' (ibid Bromfield, p. 15). The number of ships-masts visible in the present picture demonstrates how busy Hull's docks were in the late nineteenth century when it was one of the busiest ports in the country. The imposing three-domed building in the present picture was the Dock Offices (it now houses Hull Maritime Museum), the headquarters of the Hull Dock Company in Queen Victoria Square. This magnificent example of Victorian architecture was built in 1871 and was relatively new when it was painted by Grimshaw which demonstrates the modernity of his cityscapes. The monument to the left is that of William Wilberforce, the Yorkshire MP and anti-slavery campaigner. The monument, built in 1834 comprised a ninety foot Doric column upon which stood a twelve foot statue of Wilberforce. It stood for almost a hundred years at the edge of Princes Dock until the 1930s when the dock was closed and the monument was moved. On the left of the
composition, behind the skeletal rigging of the sail ships is the silhouette of St John's Church, now demolished.

Another picture of Princes Docks dated 1882 is in the collection of the Ferens Art Gallery in Hull whilst another version was sold in these rooms (17 December 2009, lot 51).
at 6:00 AM

Thank you, it's lovely isn't it.