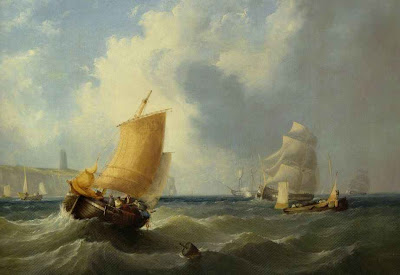 [Shipping off the South Coast]
oil on canvas

1803 - 1840.
Marine painter and watercolourist. Born in Whitby, the son of a fisherman. Worked as a sailor till he was 17 when he set up as a house and boat painter. Later went to London and began to practice as a ship painter and a scenery painter at the Pavilion Th. He was much patronised by naval officers and had an important patron in Christopher Crawford who kept the Waterman'a Arms in Wapping. He did a number of important commissions including the 'Bombardment of Algiers' fpr the Greenwich Hospital. Died of Tuberculosis.Recognised for his detailed knowledge of ships and shipping in his lively pictures.