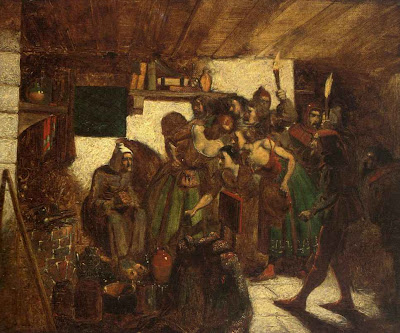 [The last of the Barons]
oil on canvas
.
1836 - 1875.
http://en.wikipedia.org/wiki/Arthur_Boyd_Houghton
Houghton was a popular oil painter and Watercolourist. The title of this striking picture is taken from an 1843 play by Edward Bulwer Lytton (nearly forgotten now but very popular in his day), and was about Richard Neville - Earl of Warwick - known as 'The Kingmaker' in 15th C England.
Houghton was also a well known illustrator and was influenced by the Pre-Raphaelites and had their sense of drama - well shown here.
http://www.victorianweb.org/art/illustration/houghton/index.html
http://www.fulltable.com/VTS/aoi/h/hton/abh.htm
at 7:35 AM