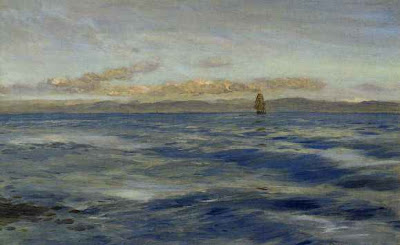 1879
oil on canvas
.
1831 - 1895.
Marine painter and watercolourist. Son of William Moore and elder brother of the famous Albert Joseph Moore. Studied under his father at the York School of Design and at the RA Schools. His early works shows Pre-Raphaelite influences but about 1857 he turned to marine painting. Exhibited at the RA and elsewhere. One of the first painters to try and observe the moods of the sea and he became more Impressionist in his approach as he got older. An important artist.
http://myweb.tiscali.co.uk/speel/paint/hmoore.htm
http://www.tate.org.uk/stives/exhibitions/dawnofacolony/roomguide.shtm
at 7:11 AM