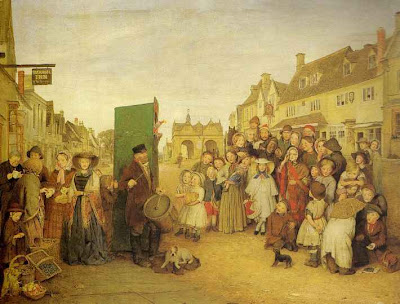 [Market Scene, with a performance of Punch] 1856
oil on canvas, laid down on panel
.
1833 - 1867.
An artist who exhibited 19 works at the RA between 1854 and 1867. He is hardly known now but was born in Worcester and is known to have briefly gone to the Birmingham School of Art but returned to Worcester to follow the master J. Kyd. Most of his works seem to be set in and around Worcester and this scene is probably set in the town. He did travel to Italy but died there in 1867. His oil paintings are very rare.
http://www.tate.org.uk/servlet/ArtistWorks?cgroupid=999999961&artistid=2491&page=1
http://goldenagepaintings.blogspot.com/2008/08/edward-thompson-davis.html
at 6:00 AM