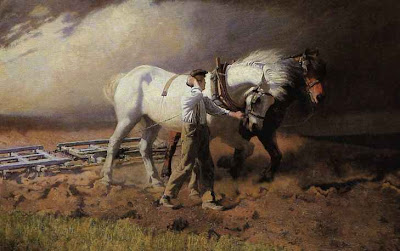 1887
oil on canvas
exhibited at the RA in 1889
.
1862-1933.
http://www.artnet.com/artist/643149/george-gascoyne.html
A painter and etcher, George Gascoyne painted landscape, genre and literary subjects. He studied at the Slade School, and later married Ethel Slade. He exhibited at the Royal Academy from 1883 with works such as The Knife Grinder, The Good Samaritan, and The Miry Beasts Retreating frae the Plough—Burns. Gascoyne also exhibited at Glasgow Institute of the Fine Arts; Walker Art Gallery, Liverpool; New English Art Club; Royal Society of British Artists; Royal Society of Painter-Etchers and Engravers; Ridley Art Club; Royal Institute of Oil Painters; and the Royal Scottish Academy. He lived at Aldbourne, Wiltshire, and was a Member of the Royal Society of Painters and Etchers.
Peter Nahum biography
at 6:00 AM

I love the mood on this painting

I forgot the title, though perhaps it's obvious 'Harrowing'. That sky is quite something.