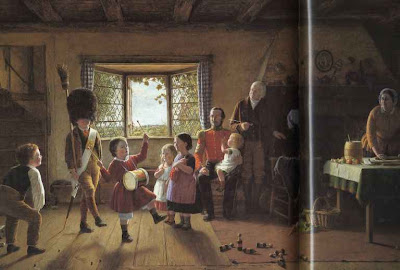 oil on canvas
Both Frederick and his brother George were genre painters who belonged to the Cranbrook Circle and sometimes worked alongside Webster, Horsley and O'Neill at the Old Studios there.
The Father in uniform here is in Her majesty's Guards and is probably a recruiting Sergeant. The fallen skittles may be symbolic of the enemies of the Crown.
http://www.yortime.org.uk/artalk/hardy.htm
at 5:00 PM