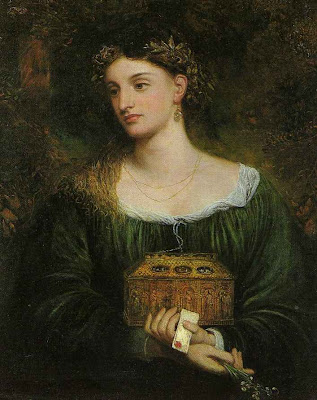 [Pandora]
oil on canvas
.
1821-1889.
http://www.artnet.com/artist/131204/james-smetham.html
http://en.wikipedia.org/wiki/James_Smetham
Smetham worked in a number of genres: landscapes, portraits, and literary and religious themes. He began his studies at the Royal Academy in 1843, but mental illness that fully manifested itself in the mid-1870s plagued his later career, and after 1869 he no longer exhibited at the Royal Academy.
http://www.artmagick.com/pictures/artist.aspx?artist=james-smetham
at 6:00 AM