Thomas Reynolds Lamont - At the Pawnbroker's 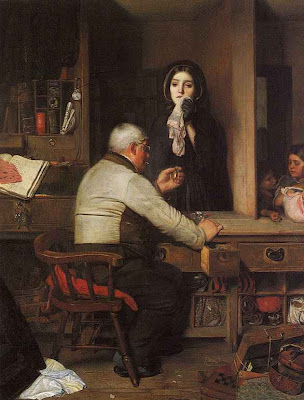 oil on canvas
31 x 25"
signed T.R. Lamont/1859 l.r.
exhibited RA 1861
http://www.artnet.com/artist/568871/thomas-reynolds-lamont.html
-- update --
I did some research on this painting as it is rather interesting in its way. If you look carefully you can see the miniature is a soldier in a scarlet uniform. Given the date of the painting (1859), he was probably killed in the Crimean war (1854-6). There seems to be a child's silver rattle resting on the counter so she may well have once been quite well off before being widowed.
The alternative title may have been suggested by Charles Dicken's novel of the same name.
at 6:00 AM