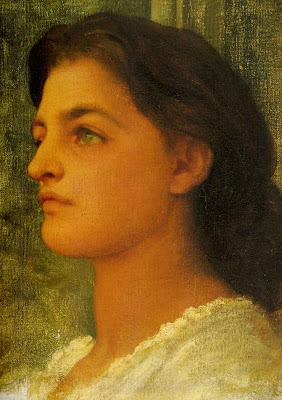 oil on canvas
9 1/4 x 7"
.
Leighton seems to have done several pictures with this title and one of these was exhibited at the Society of British Artists in 1873. This particular version is believed to have been painted in Rome in a garden studio at the French Academy at the Villa Medici using an unknown local model (also known to have been painted by the French artist Antoine Hebert.
It was probably painted as a sort of aid memoire for the artist, to be used later in larger compositions. He never sold these 'studies' and he is known to have had a group of them hanging on his studio walls.
at 6:00 AM