Frederic Edwin Church - The Heart of the Andes 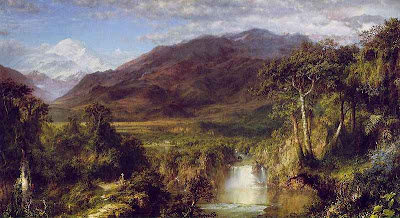 More than five feet (1.7 metres) high and almost ten feet (3 metres) wide, it depicts an idealized landscape in the South American Andes, where Church traveled on two occasions.
I don't often American artists but Church was much admired by Ruskin for his style and there is a fascinating story attached to this painting.
The Heart of the Andes was first exhibited publicly between April 29 and May 23, 1859 at New York's Studio Building on West 10th Street, the city's first "studio edifice" designed for artists. The event attracted an unprecedented turnout for a single-painting exhibition in the United States: more than 12,000 people paid an admission fee of twenty-five cents to view the painting. Even on the final day of the showing, patrons waited in line for hours to enter the Exhibition Room.
The installation of the work was as unique as its dimension and detail. There is no record of the appearance or arrangement of the Studio Building exhibit. It has been widely claimed, although probably falsely, that the room was decorated with palm fronds and that gaslights with silver reflectors were used to illuminate the painting. More certain is that the painting's casement-window–like "frame" had a breadth of fourteen feet and a height of almost thirteen, which further imposed the painting upon the viewer. It was likely made of brown chestnut, a departure from the prevailing gilt frame. The base of the edifice stood on the ground, ensuring that the landscape's horizon would be displayed at the viewer's eye level. Drawn curtains were fitted, creating the sense of a view out a window. A skylight directed at the canvas heightened the perception that the painting was illuminated from within, as did the dark fabrics draped on the studio walls to absorb light. Opera glasses were provided to patrons to allow examination of the landscape's details, and may have been necessary to satisfactorily view the painting at all, given the crowding in the exhibition room.
Church's canvas had a significant effect on its viewers: "women felt faint. Both men and women succumb[ed] to the dizzying combination of terror and vertigo that they recognize[d] as the sublime. Many of them will later describe a sensation of becoming immersed in, or absorbed by, this painting, whose dimensions, presentation, and subject matter speak of the divine power of nature."
Accompanying the admission were two pamphlets about the painting: Theodore Winthrop's A Companion to The Heart of the Andes and the Reverend Louis Legrand Noble's Church's Picture, The Heart of the Andes. In the manner of travel guides, the booklets provided a tour of the painting's varied topography. An excerpt from Noble reads:
Imagine yourself, late in the afternoon with the sun behind you, to be travelling up the valley along the bank of a river, at an elevation above the hot country of some five or six thousand feet. At the point to which you have ascended, heavily-wooded mountains close in on either hand, (not visible in the picture – only the foot of each jutting into view,) richly clothed with trees and all the appendage of the forest, with the river flowing between them. … Conspicuous on the opposite side of the river is the road leading into the country above, a wild bridle-path in the brightest sunshine, winding up into, and losing itself in the thick shady woods. The foreground … forms of itself a scene of unrivalled power and brilliancy, …
Church wanted Humboldt, his intellectual mentor, to see his masterpiece. Close to the end of the first exhibition, on May 9, 1859 he wrote of this desire to American poet Bayard Taylor:
The "Andes" will probably be on its way to Europe before your return to the City … [The] principal motive in taking the picture to Berlin is to have the satisfaction of placing before Humboldt a transcript of the scenery which delighted his eyes sixty years ago—and which he had pronounced to be the finest in the world.
Humboldt, however, had died on May 6, so the planned shipment to Europe did not occur. However, later in 1859, the painting was exhibited in London, where it met with similar popularity, and engravings allowed for broad distribution. Showings in six more U.S. cities followed. The 1864 exhibition at the Metropolitan Sanitary Fair at New York's Union Square is better documented than the original exhibit; photographs confirm how the painting was displayed.
The painting was widely acclaimed. Poetry was written in its honor, and the composer George William Warren dedicated a piece to it in 1863. Mark Twain described the painting to a friend:
You will never get tired of looking at the picture, but your reflections—your efforts to grasp an intelligible Something—you hardly know what—will grow so painful that you will have to go away from the thing, in order to obtain relief. You may find relief, but you cannot banish the picture—it remains with you still. It is in my mind now—and the smallest feature could not be removed without my detecting it."
Church eventually sold the work for $10,000—at that time the highest price ever paid for a work by a living American artist. The painting was acquired by Margaret Dows, widow of David Dows, and bequeathed to the Metropolitan Museum of Art upon her death in February 1909. In 1993, the museum held an exhibition that attempted to reproduce the conditions of the 1859 exhibit.
Wikipedia
http://en.wikipedia.org/wiki/The_Heart_of_the_Andes
at 5:20 PM