John Morgan - Which Hand has It ? 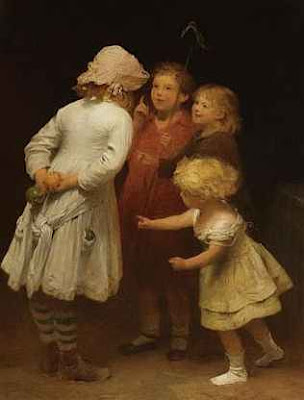 36 x 28.5"
signed l.l.: John Morgan
oil on canvas
estimate : 50,000—70,000 GBP
.
http://www.bridgemanartondemand.com/art/96868/Snowballing_1865
John Morgan (b London 1822 d.Hastings 1885) a successful Victorian artist.Studied at School of Design,London and also trained in Paris under Thomas Couture (1815-1879).Whilst living in Aylesbury in 1861 found fame with his paintings The Jury and The Country Auction. A member of the Society of British Artists (SBA).His work was influenced by Thomas Webster and William Powell Frith.
His son,Frederick Morgan was an equally popular artist, most noted for His Turn Next , famously used by the Pears Soap advertising campaign .
at 5:00 PM