John Atkinson Grimshaw - On the Clyde 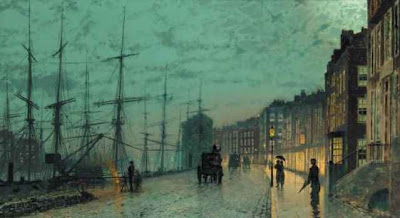 The work of Atkinson Grimshaw is valuable and unique in several respects. He made a great popular success out of that amalgam of Pre-Raphaelite sentiment, nature and industry that dominated the culture of northern England in the later nineteenth century. His work is our only visual equivalent to the great epics of industrial change, the novels of Gaskell and Dickens.’ (David Bromfield, Atkinson Grimshaw 1836-1893, exhibition catalogue, 1979-1980, p. 5)

Grimshaw began to expand the scope of his subjects in the early 1880s, beginning a series of paintings of urban street scenes and docks set in the evening light for which he is best known. His growing popularity, particularly with art collectors in the northern urban centres, encouraged him to paint industrial views of ports and harbours in Liverpool, Hull, Scarborough, Whitby and Glasgow. Bromfield has interpreted Grimshaw’s port scenes as ‘icons of commerce and the city. They are remarkable in that they record the contemporary port’s role within Victorian life; they appealed directly to Victorian pride and energy. They also show that same darkness, a mysterious lack of complete experience of the subject which one associates with large cities and big business, which Dickens recounts so well in Bleak House and Great Expectations and for which Grimshaw’s moonlight became a perfect metaphor.’ (ibid Bromfield, p. 15)

The present picture is an early version of a composition which Grimshaw painted on several occasions, depicting the road bordered by a row of shops and houses facing the docks at Brommielaw in Glasgow. On one side of the composition tower the rigging of the ships, symbolic of Victorian commerce, balanced on the right by the shop-fronts with their welcoming golden light, which equally represent the trade of the age. The road is peopled by a contrast of fashionable ladies hurrying through the rain and road-menders warming themselves at a burning brazier. The attention to detail is meticulous and poetic but Grimshaw was not interested in depicting a topographically accurate view of Glasgow and in the various versions of this composition he altered the architecture of the buildings and the order in which he arranged them. He also invented the names for the shops in his pictures and altered the types of goods for sale in the windows for artistic effect.

A variant of the present picture entitled Shipping on the Clyde also dated 1881 (private collection) is reproduced in Alexander Robertson's book Atkinson Grimshaw (p. 75).
at 6:00 AM