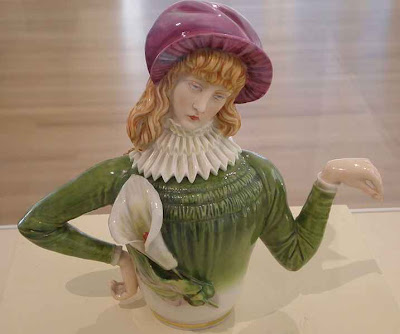 The Aesthetic Movement is a 19th century European movement that emphasized aesthetic values over moral or social themes in literature, fine art, the decorative arts, and interior design. Generally speaking, it represents the same tendencies that symbolism or decadence stood for in France, or decadentismo stood for in Italy, and may be considered the British branch of the same movement. It belongs to the anti-Victorian reaction and had post-Romantic roots, and as such anticipates modernism. It took place in the late Victorian period from around 1868 to 1901, and is generally considered to have ended with the trial of Oscar Wilde (which occurred in 1895).
http://en.wikipedia.org/wiki/Aestheticism
at 6:00 AM

I always have a problem with this movement, given the later influence of Bauhaus on us moderns. The Aesthetics thought the Arts should provide refined sensuous pleasure, INSTEAD of 1] conveying moral messages and 2] being useful. The cult of beauty looked a bit skimpy, didn't it?

But the silliest Aesthetic thought that I could detect was their hope that life/nature would copy well-designed art, and not vice versa.

I don't think I understood it at all. Do you have any more Aesthetic Movement art objects that might explain their beliefs better?

I like a lot of the work from this period / movement but would recommend:

as a very good summary.