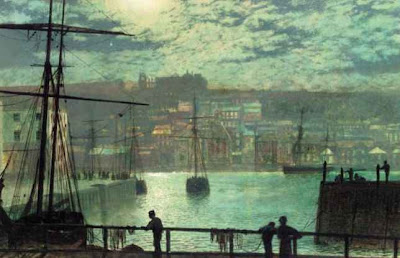 In the late 1860s Grimshaw became increasingly interested in painting ships and the sea. On the one hand he focused on the great ports of London, Glasgow, Liverpool and Hull and on the other, he captured the more intimate harbours of the east side of the harbour with Whitby Abbey dominating the sky line. In 1867 Grimshaw painted what is arguably the first of his moonlit harbour scenes, Whitby Harbour by Moonlight (private collection) and from the end of the 1860’s, the fishing town was to become a frequently recurring subject.

Despite rarely exhibiting these views, Grimshaw’s paintings of Whitby were immediately popular with collectors and quickly snapped up directly from the artist’s studio. It was the mechanism of the port and the role in the life of the city which fascinated Grimshaw and explains why in all his paintings he always includes various signs of activity, such as the nonchalant figures of dock workers in the foreground of the present picture. The lights of the buildings twinkling in the night and reflecting in the still waters of the dock, further suggest signs of life amid the silent streets skirting the dock.

Grimshaw’s depiction of the port is full of painstaking detail and he clearly celebrates its industrial role as one of the most active fishing ports of northern Britain. Rather than concentrating on the smoke and dirt of a busy port he chooses a moonlit view and presents a beautifully detailed image. Pictures such as this appealed directly to the Victorian public’s pride in their industrial achievements and explains Grimshaw’s immense success as an artist.

The contrast of shadows and moonlight in the present picture is typical of Grimshaw’s oeuvre during the second half of his career. The artificial brightness of the light together with the blackness of the boats in the foreground recall characteristics of collotype photography that developed in the late 18th century and which Grimshaw, as an artist, would have undoubtedly been aware of. Like James Tissot he was also fascinated by the intricacies of ship rigging and as the masts and ropes of the ship exemplify he devoted great attention to these specific details.

'The 1870s were the period of Grimshaw's greatest success, with an increasingly popular local reputation, soon to spread to London...' (Alex Robertson, Atkinson Grimshaw, 1988, p. 35) In 1874 one of his pictures was accepted by the Hanging Committee of the Royal Academy for inclusion in the Summer Exhibition and regular sales of his paintings made him financially more stable than he had been previously. From 1876 he was able to rent a second home at Scarborough, named Castle-by-the-Sea after a poem by Henry Longfellow. It was on this rugged Yorkshire coast that he painted some of his most atmospheric nocturnes including the dramatic The Burning of the Spa Saloon (Scarborough Art Gallery) an event he had witnessed in 1876 and In Peril of 1979 (Leeds City Art Galleries) to the more tranquil Whitby from Scotch Head of 1878 (Richard Green Gallery) and The Lighthouse at Scarborough of 1877 (private collection). The similarity between Grimshaw's atmospheric views of the harbour at Whitby and those by the contemporary photographer Frank Meadow Sutcliffe, has often been noted. Grimshaw and Sutcliffe are not known to have been acquainted and it is more likely that the photographer was influenced by the painter rather than visa versa.
at 6:00 AM