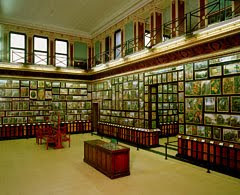 Marianne North (born 1830) was the daughter of Frederick North, MP. She was a talented artist with a fascination for travel, who concentrated on painting flowers in their natural habitats. She travelled to Canada and the United States, the Caribbean, Brazil, Australia, New Zealand, South Africa, and throughout Asia, painting plants, animals and landscapes as she went. Following a successful exhibition of her work in 1879, Marianne offered her paintings as a gift to Kew. The Gallery is unique and extraordinary. It is thought to be the only permanent solo exhibition in the country by a female artist and its striking originality is in its unique pre-Aesthetic hanging style. The Gallery was designed by Marianne's friend James Fergusson, an architectural historian, whose theories on the illumination of Greek temples were exemplified in his design of the Gallery. Marianne arranged for a dado of exotic woods to be put below the pictures, and decorated the doors and lintels herself, including painting a coffee bush over one doorway and tea plant over another as a gentle reference to her original wish that refreshments should be served in the Gallery. The 120-year old gallery is now deteriorating rapidly and in need of major restoration. Some walls are not sound, the roof is badly patched and as a consequence there are damp areas leading to mould and fungus outbreak - this is all a serious threat to the paintings. Less than 6% of Kew's audience visits the Gallery today, but Kew hope to change that. The total cost of restoring the Gallery, surveying and conserving the paintings and improving access is £3.7 million - they are hoping that the HLF will cover half the cost. To encourage this wonderful project, the Trust offered a grant of £5,000 towards restoring decoration around the doorcases. In February 2009, members of HOLT's society of Friends visited the building to see how work was progressing. The building was re-opened in late 2009. 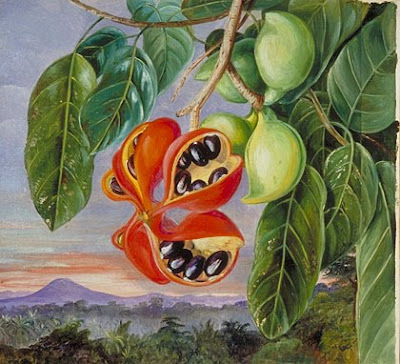