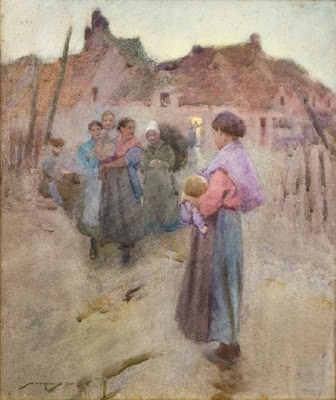 Idealised rural village scenes were popular during Victorian times. William Lee Hankey here gives a little drama, with the young woman and child isolated from the main group. The title of the work invites the viewer to guess what they are saying about her.

During the early 1900s Hankey moved to France where he painted peasant subjects almost exclusively. He was influenced by the French artist Bastien-Lepage (1848-1884), who painted scenes of French peasant life in an idealised realist manner. Lee-Hankey was also a successful printmaker in the early 1900s, with many of his rural subjects being produced as prints.

Born in Chester, England, Hankey studied at the Chester School of Art, the Royal College of Art, South Kensington, and in Paris. Back in London he began exhibiting at the Royal Academy in 1896. Lee Hankey was President of the Royal Sketch Club from 1902 to 1904. On active service during World War I, he served with the Artists’ Rifles in Flanders in 1915.