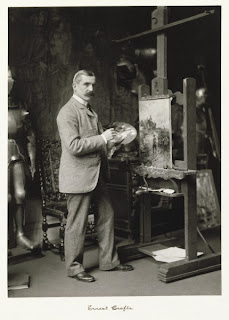 "While there is a vast amount of documentation covering Victorian painting, areas of doubt still remain and biographical uncertainities abound. Artists known to have flourished appear to hsve left a meagre legacy of paintings; paintings of great quality by artists barely heard of are still surfacing after a long period of submersion. There are scores of painters whose fame rests on just one or two paintings, like W. S. Burton with The Wounded Cavalier and Henry Wallis with The Death of Chatterton, although the former exhibited at the Royal Academy and British Institute for thirty years, and the latter painted a number of pictures in the 'fifties earning the approbation of Ruskin. In a survey of the period one is often compelled to 'row out', as Lyton Strachey said, 'over the great ocean of material and lower down into it, here and there, a little bucket, which will bring up to the light of day some charecteristic specimen, from those far depths, to be examined with a careful curiousity'."