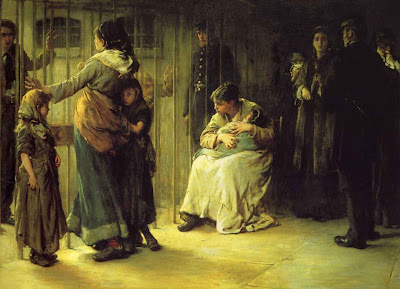 The painting made Holl's reputation when it was exhibted at the RA in the same year and he was subsequently elected an ARA. Holl visited Newgate and the Governor became a friend. The section painted was called the Cage where prisoners on trial were allowed at certain times to see their friends. Holl wrote it moved him to see prisoners of all sorts awaiting the results of their trials.

Holl himself died of heart disease at the early age of 43.
In the same year as this painting, 1878, he began painting portraits which mt with a lot of success. He painted many famous people such as the Price of Wales, Gladstone etc. His range of subjects is impressive.
at 6:00 AM