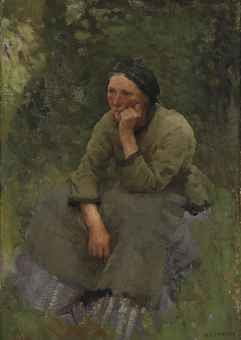 When Clausen moved to Childwick Green, near St Albans in the Autumn of 1881, his work changed fundamentally. The Hampstead street scenes and interiors ceased and his entire production was given over to recording the life of the fields. 'One saw people doing simple things', he later recalled, 'under good conditions of lighting... Nothing was made easy for you: you had to dig out what you wanted' ('Autobiographical Notes', Artwork, no. 25, Spring 1931, p. 19, quoted in K. McConkey, Sir George Clausen RA 1852-1944, 1980, ex. cat., Bradford and Tyne and Wear Museums, p. 29). The first results of this liberating experience appeared in the following Spring when Gleaners (sold in these Rooms, 24 November 2004, lot 40) was shown at the Grosvenor Gallery where it was seen for the first time that Clausen had joined the mainstream of European rural naturalism, led by Jules Bastien-Lepage and then considered avant-garde. His friend, Dewey Bates, recalled that after his arrival in Hertfordshire, the painter was able to hold;

"a mirror up to nature whether it be in the delineation of a ploughed field, a weather-beaten, wrinkled woman of the fields, a ploughboy or a country maiden. He puts them before you with all the infinitely delicate effects of atmosphere, with the reality of truth, with the simplicity of nature. He expresses plainly the poetry, the charm, which he himself has discovered in the subtle colour and modelling of a labourer's face, in the pearly greys of a fallow field or a bit of stubble, even in the tints and tones of a smock-frock or a corduroy trouser".
(D. Bates, 'George Clausen ARA', The Studio, V, 1895, p. 7).

In his reference to the 'weather-beaten... woman of the fields', Bates was undoubtedly recalling one of Clausen's favourite models - a peasant woman who first appears in A Moment's Rest. Not only did she pose for the painter's important pictures such as Winter Work, Day Dreams, Flora, A Woman of the Fields and Labourers after Dinner, but the artist also photographed her as an aide-memoire for other compositions (K. McConkey, 1980, pp. 29-39).

Bastien-Lepage's resting labourers were regarded as degraded humanity. For the young Clausen however, impressed by the writings of William Morris, the true degradation occurred in the metropolis. He believed that it was the painter's mission to present objectively a rural underclass by whose toil human life was sustained. In this he had a second powerful visual source in Jean-François Millet who was ever reminded of physical toil as the common lot of the peasant. The first suggestion of this visual idea originates in A Moment's Rest.
http://www.christies.com/lotfinder/sir-george-clausen-ra-rws-a-moments/5521084/lot/lot_details.aspx?from=salesummary&pos=8&intObjectID=5521084&sid=9954c15e-eda4-4842-adcb-7417973762cc&page=3
at 1:00 PM