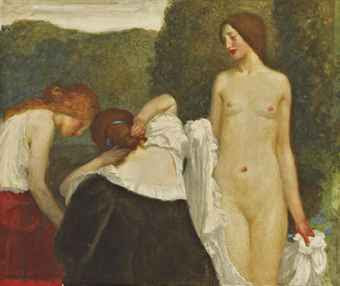 Unlike many of his contemporaries Bell painted as much in watercolour as in oil. Exhibiting his first painting at the Royal Academy in 1885, in 1914 he was elected an Associate member, and from then onwards he showed annually until his death, being elected a full Royal Academician in 1922. In 1901 he was invited to become an Associate of the Royal Society of Painters in Water-Colours (the Old Watercolour Society) and he was elected a full member three years later, by which time he had exhibited twenty-nine works. During that period watercolours became Bell's principal form of expression, and he wrote enthusiastically about the merits of the watercolour medium, which he prized above all others, in the second annual volume of the Old Water-Colour Society's Club.

The figures in the present watercolour appear to relate to those in The Pool, a watercolour dated 1906 and exhibited at The Royal Society of Painters in Water-Colour, Winter exhibition, 1906, no. 41.
http://www.christies.com/lotfinder/robert-anning-bell-ra-rwsbistrongemfont-three/5521042/lot/lot_details.aspx?from=salesummary&intObjectID=5521042&sid=9954c15e-eda4-4842-adcb-7417973762cc
at 6:00 AM

Painting is an very difficult art. In this painting painter show there extra ordinary skills and made a very beautiful painting. This is look like a real picture.Click Here Professional Structured Cabling Services

This painting is very beautiful. According to me at that time only black and white colors introduced that's why this painting is not colorful. Many countries providing Fully funded scholarship for MBBS in China. So if you have excellent academic record you should apply for this now. If you need any type of help our staff will be available for you.