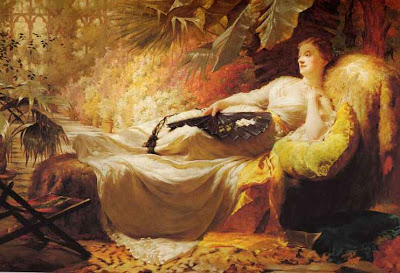 [portrait of Adelaide Maria, Countess of Iveagh]
oil on canvas
.
'Dodo' as she was known to her friends was the daughter of Richard Samuel Guiness, the MP for Deepwell, County Dublin. She married her cousin Edward Cecil Guiness, first Earl of Iveagh in 1875, a highly romantic affair much covered at the time by the press. Lord Iveagh was the grandson of Arthur Guiness, founder of the famous brewery. Lord Iveagh was noted for his charitable schemes in Dublin and London and a close friend of the Prince of Wales who was often a guest at the estate in Suffolk, Elveden Hall.
This is a copy of the first portrait made in 1885 for 600 gns. Lord Iveagh loved it so much he asked Hicks to make a copy in a horizontal format. This hung at Luttrellstown Castle in Ireland, the original hung at Elvesden until 1984.
at 6:00 AM