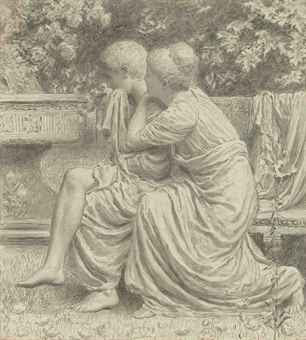 This is the full-scale cartoon for Moore's painting An Idyll in the Manchester City Art Gallery. Shown at the Royal Academy in 1895, the picture was his last exhibited canvas. It betrays the interest in narrative and symbolism that marks such a radical departure in his very late works and is generally related to the illness he suffered during the last years of his life. The chief expression of this tendency is The Loves of the Winds and the Seasons (Blackburn Art Gallery), completed only about a week before his death on 25 September 1893.

A pastel study for An Idyll, now missing, was in Moore's memorial exhibition at the Grafton Galleries, London, in 1894, and a study for the girl's head (black chalk on tracing paper, 15 x 11 5/8 in.) was lent by a private collector to the exhibition Albert Moore and his Contemporaries held at the Laing Art Gallery, Newcastle-upon-Tyne, in 1972, no. 75.