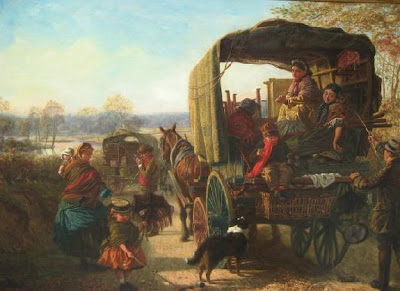 Frederick Bacon Barwell was an important English artist who specialized in genre and domestic scenes. He studied at the Royal Academy Schools and was much influenced by his friend Sir John Everett Millais (1829-1836). The two often worked together in Barwell’s studio, and interestingly, Millais completed some of his most important paintings while working together. After having completed his studies, Barwell exhibited widely in London and the provinces, including: the Royal Academy, British Institution and Royal Society of British Artists with titles: “The London Gazette” 1855; “Adopting a Child” 1857; “A Perplexing Letter” 1874. Frederick Barwell was greatly admired by both his contemporaries and critics alike, including John Ruskin, perhaps the most discerning of all, who described his work as “expressive and well considered.” Flitting is a superb example of his work, both in execution and subject matter. It tells the story of an English family “flitting” with all their family goods and pets. Painted with accuracy and enormous detail, it epitomizes the very best of Barwell’s work. 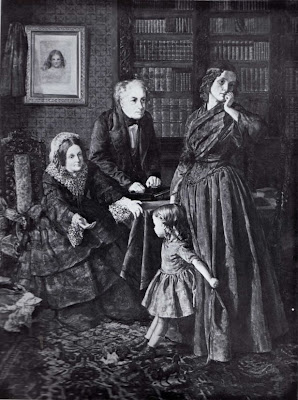