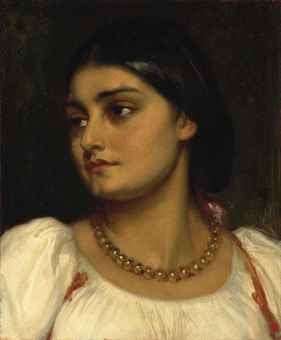 This picture is testament to the enduring friendship between Leighton and Giovanni Costa which lasted for more than half a century. Thought to have been executed in 1858, five years after the artists met, it is one of several paintings that changed hands between the two men over the course of their careers.

Costa 'who as an artist is one in hundreds and as a man one in thousands', as Leighton told Walter Crane in 1872 - was the central figure in the Etruscan School of landscape painters. The name does not refer, as might be imagined to Tuscany, but to his nickname 'The Etruscan'. The group acquired some formal coherence in 1883, but long before this it had existed in a looser sense. Its aim was to express poetry and emotion through landscape, studied at first hand, but given a distinctly abstract interpretation; a narrow rectangular format was perhaps the most obvious hallmark of the Etruscan style. Although many of its exponents were Italian, the group attracted a number of English acolytes who visited or settled in Italy, including George Howard, George Heming Mason, William Blake Richmond, Walter Crane and Mathew Ridley Corbet.

Costa was born in Rome in 1833 and had a lifelong attachment to the city and the Roman Campana. He first met Leighton in 1853 when the artist was in Rome to paint Cimabue's Madonna (The Royal Collection, on loan to the National Gallery, London). Their friendship deepened to the point where Leighton would revisit Italy almost every year, and spend a few days with Costa looking at the Old Masters they both so passionately admired. They also went on sketching trips, a process vital to the development of the Etruscan school.

The present picture is typical of the small scale works that Leighton made in such numbers on his foreign travels. Essentially executed for his own pleasure, some served as aides-memoires for the large scale subject pictures that he would later compose in the studio. Photographs of Leighton's studio in his lifetime show many of them hanging on his walls for daily reference. This completed sketch was undoubtedly given to his friend as a momento of one of their shared painting trips.