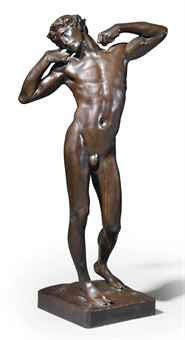 Probably inspired by his model Angelo Colorossi, seen stretching after a sitting, The Sluggard, or An Athlete Awakening from Sleep, the work's original title, was almost certainly conceived as a pendant to An Athlete Strangling a Python (1877). The full scale work was exhibited at the Royal Academy in 1886 and was awarded a medal of honour when it was shown at the Paris Exposition Universelle three years later. Acquired from Leighton's studio sale in 1896 by Henry
Tate, the full size bronze is now in the Tate Gallery. Benedict Read suggests the subject can be seen 'as a symbol of the art of sculpture, liberated by Leighton, flexing itself for renewed activity after a long time in the shackles of convention.'