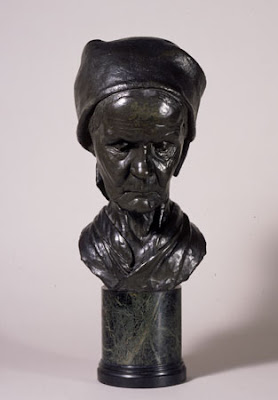 This sculpture is a portrait of an old woman associated with Ford’s family. According to the artist’s daughter, the woman ‘recoiled from it in horror’ after seeing the portrait for the first time.

The subject is wearing a traditional headscarf or handkerchief worn by Irish women of the period, although it is somewhat stylised. In contrast to Ford’s later, ‘ideal’ portrait studies of young women, here the artist has unflinchingly captured the harsh realities of old age. Such realism was one the primary aims of the ‘New Sculpture’.