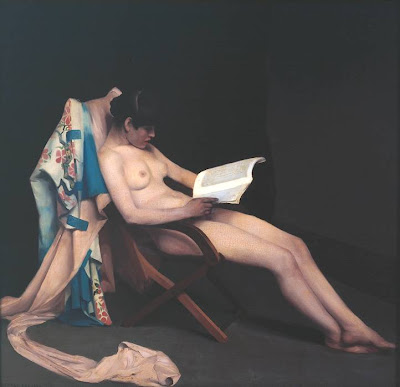 b Lorient, Brittany, 23 March 1847; d St Leonards-on-Sea, Sussex, 23 April 1926). English painter and etcher of French birth. He was born and educated in France and settled in England in 1878, when he quickly established a reputation. Largely self-taught, his few extant early paintings show an eclectic style that combines the techniques of the Old Masters, which he studied in detail, with the subject-matter of modern urban life. In 1885 he was introduced to James McNeill Whistler, his neighbour in Chelsea, London, and in consequence a lifelong friendship was formed. As Roussel was a member of Whistler’s London circle his work in watercolour and oil was influenced by the latter in style and choice of subject-matter. His oft-quoted remark that he was a ‘pupil of Whistler’ is, however, belied by his frequently distinct style, as seen in such paintings as the Reading Girl (1886–7; London, Tate). In 1888 Whistler introduced him to the techniques of etching and drypoint, resulting in such etchings as the Sign of the ‘White Horse’, Parson’s Green (c. 1893–4; see Rutter, pl. xxx). For the remainder of his life he relentlessly pursued the medium, even, like Whistler, designing his own special frames. Always fascinated by the theoretical and practical nature of colour science, he constantly experimented and was an early pioneer of the technique of colour etching in England, producing such works as Dawn (see Rutter, pl. xl). An exhibitor with the Royal Society of British Artists under Whistler’s presidency, he also frequently exhibited with the New English Art Club and with the International Society of Sculptors, Painters and Gravers, and he was a founder-member of the Allied Artists’ Association in 1908.