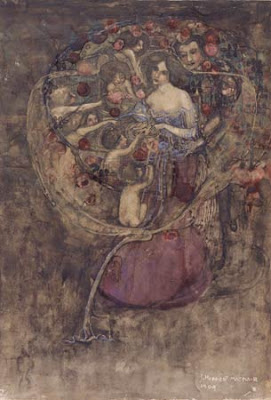 James Herbert MacNair is the least well-known member of the Glasgow Four. This was the name given by friends to Margaret and Frances Macdonald, Charles Rennie Mackintosh and MacNair. The group was influenced by the Arts and Crafts Movement and contemporary European movements such as Symbolism and Art Nouveau. They were pioneers of the Glasgow Style. This was characterised by its poetic, mystical and spiritually expressive qualities. Whilst MacNair's artistic successes have often been compared unfavourably to those of Mackintosh, MacNair had a substantial impact as a teacher following his move to Liverpool in 1898.

Born in Glasgow into a military family, MacNair spent one year in Rouen studying watercolour painting under Monsieur Haudebert. In 1888, he was apprenticed to John Honeyman, a Glasgow architect. Mackintosh entered the offices as a draughtsman in 1889 and he and MacNair struck up a friendship. As part of their training, the two attended evening classes at the Glasgow School of Art between 1888 and 1894. It was here that they met the Macdonald sisters (Frances was to marry MacNair in 1899). MacNair began collaborating with Mackintosh and the two sisters on a number of designs. Their wraith-like figures earned them the nickname 'the Spook School'.

MacNair set up his own studio in Glasgow in 1895, where he worked as a designer. He produced furniture, book illustrations, bookplates, watercolours and posters. However, it was Mackintosh, with his greater individuality of style and more masculine draughtsmanship, who received the major commissions. Indeed, it may have been in an attempt to avoid any competition with Mackintosh that, in 1898, MacNair accepted a teaching post as Instructor in Design at the School of Architecture and Applied Art at University College, Liverpool (known as the 'Art Sheds'). Whilst in Liverpool, MacNair received a small number of private commissions. He designed interiors as well as furniture, jewellery and silver. He also painted a number of watercolours and 'The Gift of Doves' is, both in style and subject matter, a typical work from this period.

The exact meaning of MacNair's subject matter is rarely clear. He frequently used literary titles for his works, although they do not often refer to any specific literature. For example, 'Psyche at the Well of Forgetfulness' (1911) does not appear to be based on any specific literary reference and may be an invention by the artist. The subject matter of 'The Gift of Doves' is similarly obscure. MacNair has used his distinctive combination of roses, birds and babies. One art-historian has suggested that the rose tree represents beauty and love, whilst the birds may refer to MacNair's own amorous and spiritual yearnings.

Whilst in Liverpool, Frances Macdonald collaborated with her husband in organising designs for the university tableaux and in some furniture, silverware and jewellery. She also painted watercolours and 'The Gift of Doves' is remarkably similar to Frances' 'The Golden Heart' which dates from the same year. Unlike Mackintosh, MacNair's style remained strikingly close to the work of the Macdonald sisters. This pair of watercolours shows the strong aesthetic sympathy that ran between MacNair and his wife.

The works were owned by Charles Reilly, professor of architecture at the University of Liverpool, who acquired them directly from Herbert MacNair.