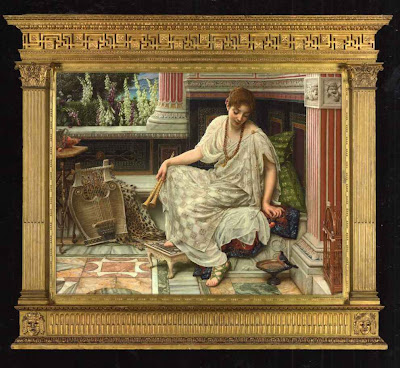 Exhibited at the Royal Academy in 1893, the title Chloe was accompanied in the catalogue by a line from the Odes of Horace, Book III, no. 9: ‘dulces docta modos et citharae sciens’ meaning ‘skilled in sweet harmonies and mistress of the lyre’. Music and harmony are key to this sophisticated arrangement, which combines the archaeological fidelity of Neo-Classicism with the Aesthetic movement’s devotion to sensual delight. The pipes in the model’s right hand and the lyre leaning against the leopard skin to her left, signify the subjects musical attributes and accomplishment. The bullfinch to which she offers cherries at her feet, also enhances the melodic theme (perhaps a rival to its mistress in terms of musical skill). Music is also obliquely referred to in the painting’s carefully composed colour harmonies and surface patterns, which combine to create a rich decorative effect. The russet, blue and gold of the intricate architectural mouldings are repeated in the beads around Chloe’s neck and picked up again in the blanket upon which she rests. The pale, shimmering tessellated pattern of her Grecian robe is echoed in the pearlised marquetry of the footstool, whose pattern reflects a smaller version of the marble floor. Sight and sound are not the only senses to in this visual feast. The bowl of ripe cherries fulfils the sense of taste, sitting directly below an aperture through which we imagine the fragrance of poppies and foxgloves enters.
Poynter painted another version of Chloe (1) (Tasmanian Museum and Art Gallery, Hobart) which he exhibited a year earlier in 1892 at the New Gallery, the more liberal alternative to the Royal Academy. The same line from Horace appeared in the catalogue and Poynter depicted the same porcelain-skinned, red-haired beauty, but the composition is entirely different. In the earlier work, Chloe is shown seated on a marble ledge between two white marble pilasters, her legs invisible, the background in shadow. With her head turned towards the viewer, she holds a less elaborate lyre in her right hand balanced on her knee. The starkness of the 1892 composition throws the beauty of the model into relief, but appears one-dimensional in comparison with the symphony of colour and form orchestrated by Poynter a year later. If Walter Pater was correct in his assertion that ‘all art constantly aspires towards the condition of music’, then Chloe is the artist’s magnum opus.

Edward John Poynter was born in Paris on the 20th March 1836. He spent most of his childhood growing up in Westminster, London, spending winters in Madeira and Rome due to his delicate health. His family was artistic on both sides, his great-grandfather was the sculptor Thomas Banks RA and his father Ambrose Poynter was an architect and watercolour painter. Edward began studying art in 1852 with Thomas Shotter Boys, a family friend, but was mainly influenced in his choice of career by his visit to Rome in 1853-4 where he met and was greatly impressed by Frederic Leighton. Having returned to London, Edward studied at Leigh’s Academy and the studio of William Dobson RA. Poynter entered the Royal Academy Schools in 1855, but his admiration for French painting led him to Charles Gleyre’s studio in Paris the following year. He remained there until 1859, with fellow students George Du Maurier, Thomas Armstrong and James McNeil Whistler, whose adventures were documented in Du Maurier’s novel Trilby, 1894.

His first commissions at this time were for decorative work including stained glass and painted furniture. After returning to England his friend William Burges employed him to decorate the ceiling of Waltham Abbey, Essex in 1860. He also contributed drawings to magazines such as Once a week and executed 12 illustrations for Edward and George Dalziel’s Bible Gallery, published in 1880.

Poynter first exhibited at the Royal Academy in 1861 and for the next few years produced small pictures of Egyptian and Classical subjects while simultaneously painting small portraits and landscape watercolours for the Dudley Gallery, London. His large-scale Israel in Egypt (Guildhall Art Gallery, London) exhibited in 1867 established his reputation, which he confirmed the following year with The Catapult (Laing Art Gallery, Newcastle upon Tyne). Both displayed an attention to archaeological detail and technical proficiency which would characterise his work. Poynter became the brother-in-law of Pre-Raphaelite painter Edward Burne-Jones in 1866 when he married Agnes MacDonald, Georgina Burne-Jones’s sister. They had two sons, the elder, Mr Ambrose Poynter became a well-known architect. In 1869 he was elected ARA.

Poynter undertook several decorative commissions during the late 1860s, including a cartoon for the St George mosaic at the Houses of Parliament, part of the Royal Albert Hall frieze (both in 1869) and the Grill Room at the South Kensington Museum from 1866-74. In 1871 he was appointed the first Slade Professor at University College, London and in 1875 became Director and Principal of the National Art Training Schools in South Kensington. His Ten Lectures on Art were published in 1879.

Between 1872 and 1879 Poynter painted and exhibited a series of four large works, Perseus and Andromeda, 1872, More of More Hall and the Dragon of Wantley, 1873, Atalanta’s race, 1876 and Nausicaa and her Maidens Playing at Ball, 1879 commissioned by Edward Montagu Stuart Granville, 3rd Baron and 1st Earl of Wharncliffe to decorate his billiard room at Wortley Hall, Yorkshire. He was elected an RA in 1876. During the 1880s and 1890s he continued to produce large classical pictures as well as smaller classical genre paintings. The latter part of Poynter’s career was increasingly involved in public office. From 1894 to 1904/5 he was Director of the National Gallery, London (the last practising artist to fill this position). In 1896 he was elected President of the Royal Academy, a position he held until his resignation in 1918. He was knighted in 1896 and created a Baronet in 1902. He was buried in St Paul’s Cathedral, London.