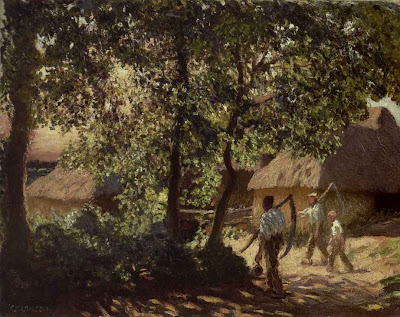 George Clausen grew up in an age dominated by images of harvesters returning from the fields at sunset. One of the most popular prints of his day was Robert Walker Macbeth's engraving after George Heming Mason's Harvest Moon, 1872 (Tate), a picture of romantic field workers bearing scythes, returning to their cottages at nightfall. As a young man Clausen had studied treatments of this theme in the work of the great French painter of rural life, Jean-François Millet. He then graduated to contemporaries such as Léon L'hermitte and Jules Bastien-Lepage - painters for whom the elegaic poetry of the 1860s and 70s gave way to the naturalistic prose of the 1880s.

This was also a time when the old exploitative 'gang labour' system in the Home Counties was overtaken by the spread of agricultural unions. The accompanying unrest in the countryside coincided with the growing popularity of mechanized farming. Clausen had celebrated the old manual methods in his Mowers, 1891 (Usher Gallery, Lincoln), a formidable depiction of harvesters at work in a midsummer meadow.1 With this canvas he publicly declared his shift towards the broken colour and atmospheric effects of the Impressionists, achieved, in the first instance, in the rich textures of pastel (see lot 110). Monumental pictures of harvesters and reapers continued, but it was only in 1898, in A Farmyard, shown at the first International Society of Sculptors, Painters and Gravers' exhibition, that he stepped back to give greater consideration to the working farms which surrounded his family home at Widdington in Essex.2

These ancient clusters of cottages, barns and byres came to represent the ideal social microcosm, at a time when radical thinkers were beginning to express doubts about the concentration of labour in cities, and its moral and physical effect on the health and strength of the nation. The neighbourliness and communal working found in the fields embody values that had been eroded. In this context the haymakers' farewell in the present work, takes on a significance that is more than incidental. It is late afternoon; evening light threading through the foliage, casts long shadows across the lane in the foreground; a reaper and his boy enter the sunlit farmyard; their companion, carrying his scythe across his shoulder and his cider-jar in his hand, turns to bid goodbye.

Clausen painted Haymakers around 1908. Its subject matter and technique suggest comparison with A Farmyard (fig. 1). In this instance a lone reaper looks back at the spectator as he heads for home.

Although formats differ, the mise-en-scène is essentially the same - with figures approaching from the right, sunlight striking the framing trees on the left and farm buildings in the background. The scale of the two canvases also indicates that Clausen was working for a new kind of patron and that the era of large Academy pieces, designed for municipal collections, was drawing to a close. These smaller works were destined for private collectors, those who might visit his third solo exhibition at the Leicester Galleries in 1909.3

We are grateful to Kenneth McConkey for his assistance in the preparation of this catalogue entry.
http://www.christies.com/LotFinder/lot_details.aspx?intObjectID=5327230
at 6:00 AM