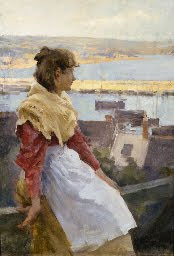 Stanhope Alexander Forbes was born in Dublin, the son of a railway manager and a French mother. He studied at Lambeth School of Art; the Royal Academy Schools between 1874-78; then for two years in Paris under Leon Bonnat. He was certainly influenced by the work of Jules Bastien-Lepage and painted in Brittany with H.H. La Thangue in the early 1880s, however, it was not until 1884 that he settled in Cornwall and became a leading member of the 'Newlyn School'. In January of that year, he wrote in a letter that Newlyn was 'a sort of English Concarneau', referring to the character of the place and to the artists that were already there. Walter Langley and Thomas Cooper Gotch he knew by reputation; Leghe Suthers had returned with him from Brittany in the previous year and Ralph Todd, who he had met in Quimperlé.

Forbes began exhibiting at the Royal Academy in 1878, and was created an Associate in 1892. His election was greeted by one writer as proof of the liberality of the Academy, for it had taken in 'the youthful leader of so audacious a school as the Newlyn school of painting' and when in the same year, he exhibited Forging the Anchor (1892; Ipswich Borough Council) at the Academy, it received far wider press coverage than any other Newlyn painting.

Dating from 1894, the present composition epitomises Forbes' subject matter and technique of this period. The artist, who championed plein-air painting wrote a few years later: 'To plant one's easel down in the full view of all, and work away in the midst of a large congregation needs a good deal of courage; but it takes even more to boldly ask some perfect stranger to pose for one under such very trying conditions. But our principles demanded it, and convinced of their virtue, I strove always to be consistent to them' (see an address by S.A. Forbes, A.R.A.: Cornwall from a painter's point of view, Falmouth, 1901, p. 8). He had written some years before that 'the great drawback to this place [Newlyn] is the girls will not pose in the streets. You know I like to paint almost always on the spot. There is only one I found who does not mind, a great big rather handsome woman. But all the pretty little ones are too shy' (see a letter from the artist, dated 10 February 1884, cited in C. Fox and F. Greenacre, Artists of the Newlyn School 1880-1900, Catalogue for the exhibition at the Newlyn Orion Galleries, 1979, p. 64).

Forbes was upset that fashion had reached his picturesque fisher folk. As early as 1884 he remarked that the girls were quite pretty despite their rather ugly English costume adding that 'fringes ruined many a pretty face: 'All very well in a stylish London beauty, but appalling with these surroundings of sea, boats, fish, etc.'. Inevitably, Forbes was drawing comparisons between the Newlyners' dress and the distinctive Breton costumes that he had painted for three summers. Four years later, there was a small measure of change in his attitude when he could admire the women's 'charming instinct of dress' and their 'neat blouses and cotton aprons of every day wear' (see S.A. Forbes, A Newlyn Retrospect, The Cornish Magazine, I, 1898, p. 86).

In his talk on The Treatment of Modern Life in Art, probably written in 1892 or 1894 Forbes argued that it is interpretation that will elevate any subjects into works of art: 'For a beauty lies as much in the light, the atmosphere which surrounds all things, as in their actual form and fashion. There is nothing which cannot be transformed by the effect under which it is seen [...] that which might seem awkward and rough, suited as it is to the conditions of its life, and in harmony with its surroundings, may be most beautiful [...] The hard lines which care and toil have left upon them, the awkwardness induced by the want of culture, the many signs of which tell of the hardships of poverty, all these are there and should be faithfully recorded; for without them the study is half told and its value lost. Seen and understood in manner, many things are to be found full of meaning'.

Norman Garstin, a fellow Newlyn resident artist summed up Forbes' approach to painting and his influence: '... the Newlyn artists came to be a name, and the technique was copied and caricatured, and finally abandoned, and other methods rose and fell and reactions had their invariable rhythmic ebb and flow ... but these sterling qualities that have gone to the making of A Fish sale on a Cornish Beach [1885; Plymouth City Museum and Art Gallery], The Village Philharmonic [1888; Corporation of Birmingham], The Health of the Bride [1889; Tate Gallery, London], The Forging of the Anchor [1892; Ipswich Borough Council], etc. these remain; to wit, keen observation, and vehement concentration, an artistic conscience always making for truth, an unerring eye, and a powerful grasp of the essentials; these remain, and leave their mark year by year on the art of England and the world' (see C. Fox and F. Greenacre, op. cit., pp. 53-68).
http://www.christies.com/lotfinder/stanhope-alexander-forbes-ra-a-fishergirl-newlyn/1820631/lot/lot_details.aspx?pos=9&intObjectID=1820631&sid=&page=2
at 6:00 AM