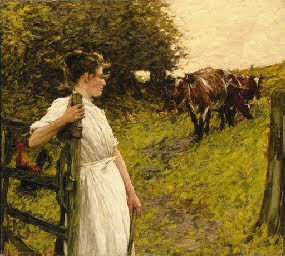 Henry Herbert La Thangue trained at South Kensington, Lambeth and Dulwich College where he met the artist, Stanhope Forbes, a fellow pupil, and a friend who would have a lasting influence on his work. On winning the Royal Academy Schools Gold Medal and Travelling Scholarship in 1879, La Thangue went to Paris to study under Jean-Leon Gérôme at the Ecole des Beaux Arts. His friendship with Stanhope Forbes resulted in a painting trip together to Brittany in 1881 and here they both became committed to the ideals of plein-air painting, inspired by the great exponent of naturalism, Jules Bastien-Lepage.

On his return from travelling in Europe with Stanhope Forbes, La Thangue first went to Norfolk, but finally settled in Runcton, near Bosham on the West Sussex coast. Here he concentrated on faithfully recording the life of the Sussex farm labourer in a series of paintings throughout the 1890s. In the most successful of these compositions he often concentrated on a lone girl or boy absorbed by a task, and surrounded by docile, farm animals. These works were always painted entirely outdoors in accordance with the principles of his artistic beliefs.

In 1896 La Thangue's painting Man with a Scythe was bought for the Chantrey Bequest thereby securing his reputation as one of the leading exponents of British impressionism and the 'square brush' technique.
http://www.christies.com/lotfinder/henry-herbert-la-thangue-ra-back-from/1820632/lot/lot_details.aspx?pos=10&intObjectID=1820632&sid=&page=2
at 6:00 AM