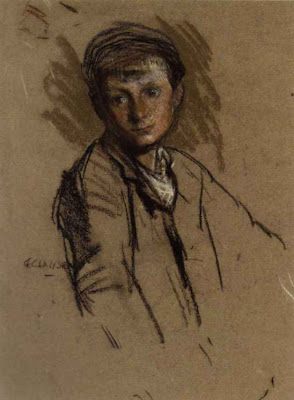 The present pastel is a study of the boy holding a winnowing fan in Clausen's largest and most celebrated barn interior - The Golden Barn, 1901 (Walker Art Gallery, Liverpool). Back in 1895 he had shown The Farmer's Boy (Tate Britain) at the Royal Academy and found that despite obvious comparisons with Jean-François Millet's The Winnower, 1853-7 (Museé d'Orsay, Paris), his Rembrandtesque interior was applauded and promptly purchased by his most important patron, Sharpley Bainbridge. Unlike the original winnower of 1895, the boy in The Golden Barn holds his fan to his right and looks down to the left, as in the present vigorous study. Other studies in the Walker Art Gallery, the Royal Academy and Plymouth Art Gallery are not fully signed and are less finished than the present example - suggesting perhaps that the painter hoped to exhibit it independently.
http://www.christies.com/lotfinder/sir-george-clausen-ra-rws-study-of/5327231/lot/lot_details.aspx?pos=6&intObjectID=5327231&sid=&page=1
at 6:00 AM